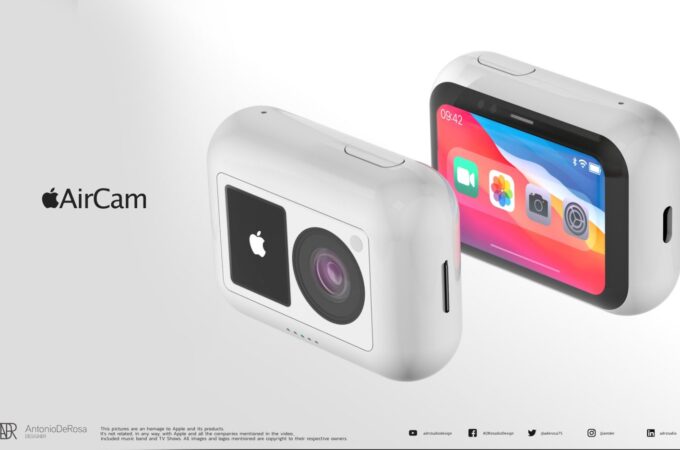 Antonio De Rosa is one of the most appreciated designers we’ve covered on our site till now and he’s back with a brand new concept. It’s the Apple AirCam, basically an action camera on par with the GoPro, but one made by Apple. It comes in the exact same size as the AirPods Pro case and also has some smart features.

The device comes with Siri, Face ID, IP68 certification, so it can take a dunking and also has 5K video capture. There’s even LiDAR here and “a lot of fun”. Unlike other products, the device can take a microSD card and also has a bottom mount, making it attachable to bike helmets, bikes and various tripods, gimbals and whatnot. It has a screen at the back and a screen at the front, which may allow you to make some nifty selfie videos. The device comes in a variety of colors, including purple, green, blue, white and black.

The design is soap-like, rounded and small with generous microphone holes and also a large sensor and lens upfront. It would be nice if we also got some accessories for this device, perhaps MagSafe-enabled, in order to extend the battery life and protect the glossy case. I feel that Apple would rather put an Action Camera mode on its iPhones, rather than launch a separate device, but that’s just my opinion. I also expect iCloud syncing here and I’d sure like to know more about its stabilization.

By the way, the UI we see in the video below is quite similar to the iOS one, but minimized and also influenced by WatchOS. Somehow all those curved edges make me feel that I could drop the device or make it very slippery and easy to lose. Angularity would work better I think.

About Kelvin
Passionate about design, especially smartphones, gadgets and tablets. Blogging on this site since 2008 and discovering prototypes and trends before bigshot companies sometimes
LG Rollable Smartphone Concept Is Back, Courtesy of TS Designer   Samsung Galaxy S22 Ultra Video is Here and Receives a Cyclops Camera