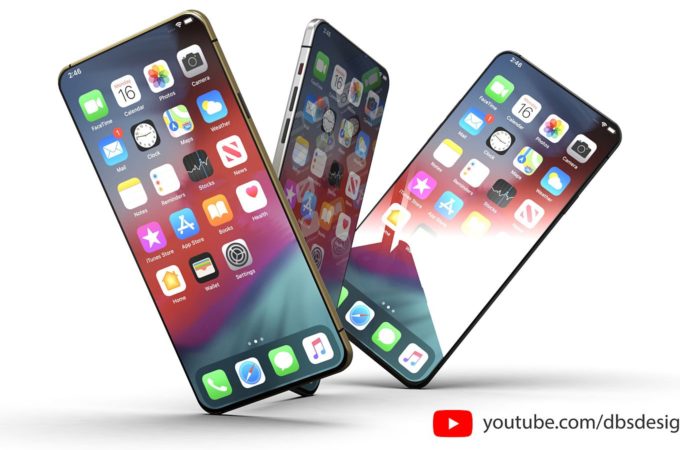 The iPhone 9 and iPhone 12 are very likely to be delayed this year, on account of the coronavirus, but that doesn’t mean they’re not coming. The iPhone 12 just got a new concept courtesy of DBS Designing Team, who opted for a slim waistline and also a full screen display. We have the details below.

The handset has the 5G logo on it, so it’s clearly a 5G machine. I think that implies having a larger battery in order to juice up the power hungry 5G modem, so the slim waistline is unlikely. The design language feels like it’s somewhere between an iPhone 6 and Galaxy S20 Ultra. Even though the back camera is slightly larger than the iPhone 11 Pro one, it’s smaller than the Galaxy S20 ultra one. It’s also close to the Pixel 4 and iPhone 11 Pro square, but protruding much less.

I see a quad camera setup at the back and what appears to be an USB-C port at the bottom. The device has an advertised in display fingerprint scanner, as well as fast wireless charging. The 5 nm Apple A14 processor should be inside, as well as an edge to edge display, possibly with an even larger diagonal than the iPhone 11 Pro Max. The front camera is also said to have been hidden under the display, hopefully in a better manner than the one found by Oppo which was a bit hit and miss.

One thing I feel that DBS Designing should have done was get rid of all those speaker grilles at the bottom and maybe even get rid of all ports and replace them with wireless connectivity.

About Kelvin
Passionate about design, especially smartphones, gadgets and tablets. Blogging on this site since 2008 and discovering prototypes and trends before bigshot companies sometimes
OnePlus 8 Just in With the Freshest Renders and Design, Made by Concept Creator   PlayStation Phone is Back With a Vengeance Thanks to Designer Jacob Estep