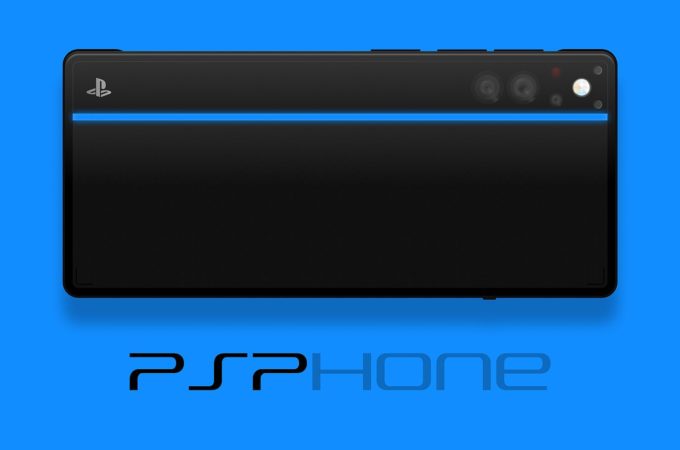 This website started off back in 2008 and among the first concept phones we covered was a PlayStation Phone. Ever since we’ve seen Nintendo Phones, Xbox Phones, you name it! There’s been a real Xperia Play, a PS Vita or two, but the portable gaming only took off over the past 2 years with gaming phones. Now the PSP Phone is back courtesy of designer Jacob Estep. Let’s see his work!

The designer envisioned a smartphone that’s also a gaming console, although more of the latter rather than the former. The device is rather rectangular and spartan in design, feeling a bit like a Cyber-shot camera. It has the trademark PlayStation blue line at the back, which I bet lights up just like a PS4 line. The designer claims he wanted to base this design off of Sony’s newest Xperia phones, but with a twist or two. At the back we see a dual camera setup, that includes a 48 MP wide shooter and 16 MP ultrawide camera,plus a Time of Flight sensor and laser autofocus, as well as microphones and flash.

There’s also shoulder buttons, like R1 and L1, a trigger pad and virtual R2 and L2 buttons. A MagPort is included at the top, allowing you to attach accessories, such as a webcam for live streaming gaming sessions. The lightbar at the back is also clearly showcased, as a way to stand out of the crowd of ROG Phones, Razer Phones, Black Shark and Red Magic models. The device has both virtual controls and attachable MagShock controls, basically a sort of joystick attachments placed on the sides. They seem to cover the screen or its edges partially.

We have two thumbsticks, a D Pad and action buttons. The phone is shown in black and white, but somehow I love the white version more, as it channels the minimalism and stripes of a well done sports shoe. PSPhone runs on Android 10 and lets you stream gameplay from PSNow or RemotePlay. Controls are available for third party games via an API. There’s also mirroring to and from the PlayStation 5. You can learn more about the concept on the designer’s website.

About Kelvin
Passionate about design, especially smartphones, gadgets and tablets. Blogging on this site since 2008 and discovering prototypes and trends before bigshot companies sometimes
Apple iPhone 12 Gets the DBS Designing Treatment, With Very Slim Waistline   iPhone 12 Concept Gets New Design, 6 Cameras, Holographic Display