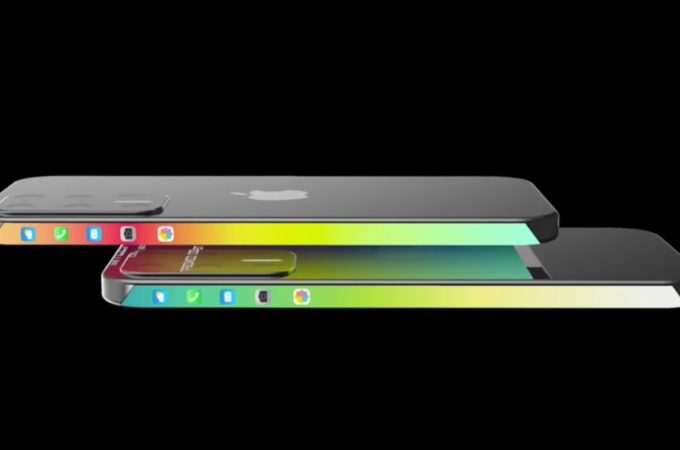 We’re back with an iPhone 12 concept, after a period of not seeing so many Apple concepts featured here. This time it’s supposed to be a truly futuristic smartphone, that even packs a holographic display. It comes with a 6 camera setup that resembles the Galaxy S20 Ultra one and we have more details below.

The design was created by ConceptsiPhone and Technizo and feels a bit like a throwback to the concepts we used to see back in the iPhone 6 days. It’s got a more rounded top side and the bottom feels like the iPhone 4 even. The camera at the back is clearly inspired by the Galaxy S20 ultra and the screen continues on the sides, with the waterfall approach. At the top there’s a holographic projector, that will probably kill the battery in a matter of hours. From what I can see, this iPhone 12 concept lacks buttons and ports, so there’s that.

It also shows icons on the sides of the screen, like a secondary notification screen would. We don’t have specs, but I can easily guess there’s at least a main 64 MP camera here, if not even 108 MP. I’d easily add a large zoom camera, an ultra wide one and also a Bokeh and Macro shooter. I feel that the hologram is a bit much and Apple would never risk launching a mainstream phone with a battery killing feature. Also somehow there’s still a SIM card slot on board, even though eSIM makes more sense for a futuristic phone.

Volume buttons seem virtual this time around and they’re probably not very comfy, like we’ve seen on the Huawei Mate 30 Pro. Those actually took a while to get used to, but in the end we could live with that function.

About Kelvin
Passionate about design, especially smartphones, gadgets and tablets. Blogging on this site since 2008 and discovering prototypes and trends before bigshot companies sometimes
PlayStation Phone is Back With a Vengeance Thanks to Designer Jacob Estep   Samsung Galaxy Note 20 5G Goes Back to Galaxy Note 8 Camera Design