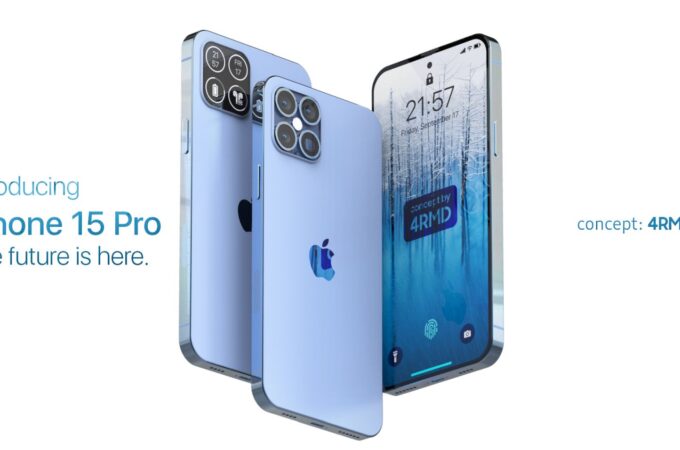 Just yesterday we introduced you to the iPhone 14 Pro and today we’re talking about the iPhone 15 Pro. It appears things are moving at a faster rate than expected, especially since we work with such talented designers like 4RMD. The creator showcases his work in the following renders and includes a second screen on the new iPhone.

The iPhone 15 Pro is also showcased in the video below and we also catch a glimpse of the iPhone 15 Pro Max. The design involves a sleek flat edge and the notch is finally gone. The display has a Ceramic Shield to protect it, while at the back we find a new quad camera design with the flash in between. The camera lenses are also mini screens that convert into a larger screen thanks to a new mechanism, possibly similar to the electrochromic one seen on OnePlus Concept models.

There’s a 6.7 inch Super Retina XDR OLED screen here with a 40 MP selfie camera hidden in the punch hole. We also get Face ID and Touch ID under the display, which is something that may happen as soon as 2022. Refresh rate graduates to 240 Hz and there’s also Always On Display. Camera upgrades are quite large, including a telephoto 12 MP shooter with 3X optical zoom, a 64 MP main camera with low light capture improvements and a 12 MP ultrawide camera with improved autofocus and Super Steady Video.

There’s a new periscope telephoto lens for a 12 MP sensors, that brings in 10X optical zoom and up to 50X digital zoom. The secondary display is actually not what I imagined… and what I said above. It’s actually more complicated: the camera panel moves inside and the secondary screen lifts up. Inside we find an Apple A17 Bionic CPU 8 GB of RAM and up to 1 TB of storage, plus a 5000 mAh battery with 25W fast charging.

There’s also iOS 17 and even… 6G connectivity. The price still starts at $1099 which is pretty nice to see. Too futuristic maybe?

About Kelvin
Passionate about design, especially smartphones, gadgets and tablets. Blogging on this site since 2008 and discovering prototypes and trends before bigshot companies sometimes
Methods Of Payment By Phone In An Online Casino   What innovative strategies have revolutionized gambling?