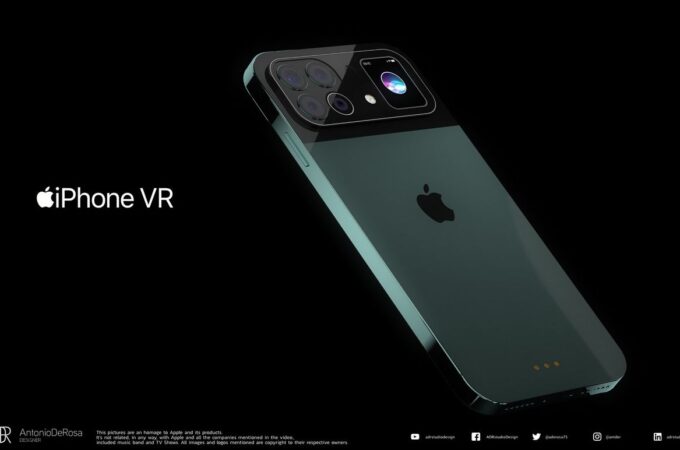 Rumor has it that Apple is going to unveil some AR gear today, which would be the start of a whole new chapter. Antonio de Rosa envisions in the meantime a whole VR system married to a VR-focused iPhone. We have renders of it and a video below.

What we’re seeing here is a symbiosis between an iPhone 13 with VR support and its own VR headset. The new iPhone is shown with a screen at the back, while the VR headset is a bit simpler and more elegant than expected. It has a a skin friendly “eye hugging area” and an Oculus-style band at the back, but with a big cutout and a different material. There’s 5G here, an Apple A15 CPU on the phone an da special VR1 CPU inside the headset. This iPhone doesn’t a port, relying on wireless connectivity instead.

The iPhone 13 has 4 cameras and a rear screen aiding you with notifications and main cam selfies. There’s 1 billion color primary dual cameras, 65W wireless flash charging and a smaller notch. We have a Smart Connector here, 2 TB of storage and a new 50 MP wide angle camera with Sony IMX766 sensor, OIS, All Pixel Omnidirectional PDAF. Then there’s the 50 MP ultrawide angle camera, with Sony IMX766 sensor as well and 110.3 angle field of view. The 13 MP telephoto camera has 5x hybrid zoom and then we see leaf taken out of the Oppo Find X3 Pro playbook: a 3 MP Microlens camera with 60x magnification.

The device is available in 3 colors: virtual green, full black and classic blue. The designer has even created a separate NFT video of the whole project.

About Kelvin
Passionate about design, especially smartphones, gadgets and tablets. Blogging on this site since 2008 and discovering prototypes and trends before bigshot companies sometimes
How Can I set up a VPN on Android?   iPhone 13 Gets Leaked in Product RED