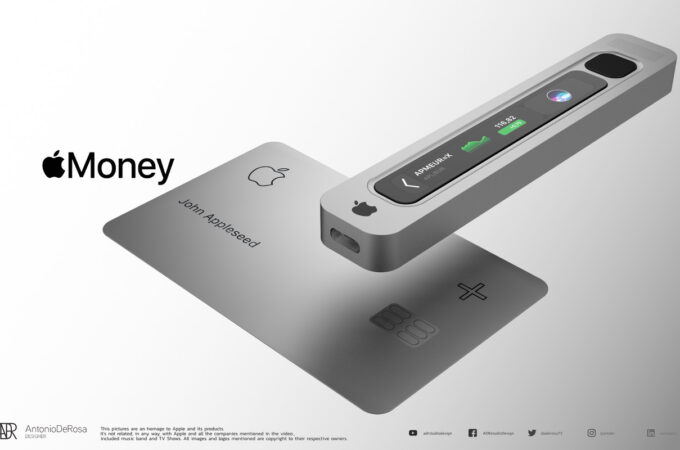 Designer Antonio de Rosa is back with an Apple concept, but not your typical smartphone, tablet or Mac. It’s something called Apple Money, but this time connected to the crypto world. We’re dealing with an electronic wallet, a card and a service all tied together.

Apple Money is a machine that mines your Apple digital currency, making it immediately available on the Apple Card+, while you use your Apple Devices, watch Apple TV+ or listen to Apple Music. Even using Apple Fitness generates more currency.

The core is a special device, shaped like a long portable scanner or maybe a sort of long USB drive. It’s got an Apple Security Chip S2 and it can manage 27 assets and ERC20 tokens. There’s a PIN code available, 24 words recovery phrases and it also offers Bluetooth and NFC Support.

There is also something I was wondering… People have started to buy Dogecoin or other cryptocurrencies more often, so why doesn’t Apple have its own crypto?

There’s a 512 x 64 pixel touchscreen, feeling like the MacBook touchbar a bit, plus an USB-C port. Audio output is done via a 2W speaker and we also get a bidirectional mic, fingerprint reader and a battery life of 12 hours in standby mode. It all measures 110 x 20 x 9 mm. Apple Money is always connected to your Apple Device s and monitors and empowers the mining ecosystem. Each participant can contribute and create a ring, with a broader benefits. I’m not sure if mining on Apple devices, which traditionally don’t have great battery life is a good idea.

Well, unless the mining happens in the cloud somehow, as it’s indicated above. Seeing Apple get into crypto isn’t entirely impossible, to be honest, but I think they’d rather back a better known coin, like Tesla did with Bitcoin. The crypto gear is possible though. If you’re wondering “What Is bitcoin“, then maybe this isn’ the device for you.

About Kelvin
Passionate about design, especially smartphones, gadgets and tablets. Blogging on this site since 2008 and discovering prototypes and trends before bigshot companies sometimes
Sony XPERIA Walkman 5G (2022) is the Audiophile Smartphone   Motorola Frontier Rendered With Unusual Design, 194 MP Camera