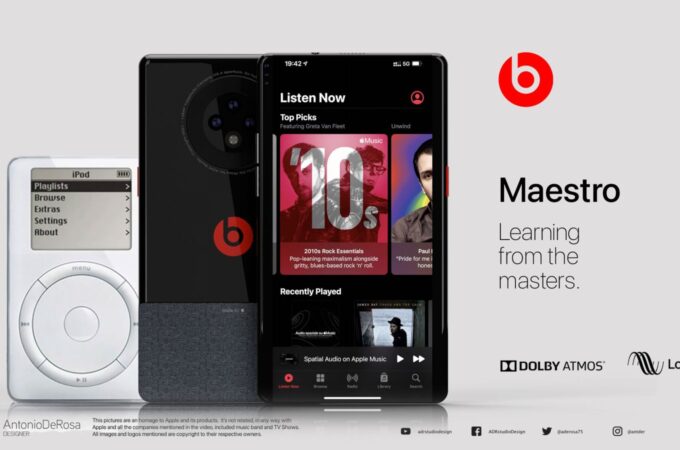 With all this talk of an Apple lossless music service, a new iPod Touch to celebrate the 20 year anniversary of the first iPod, it was high time we saw some concepts that fit the narrative. Designer Antonio de Rosa is on the case and has created a new device called Beats Maestro.

It’s all about Lossless acoustics, Dolby Atmos and it’s a… Music Phone. It’s supposed to be the heir to the iPod throne, with an audio jack (blasphemy!) and wireless charging. The front panel is notchless at least and we also get have a camera and sensors integrated into the left side. We’re definitely due an anniversary iPod and this may just be it. The device is very slim, about the size of a 3-4 credit cards, or at least it seems so at first sight. The problem is that nowadays media players are basically dead, long time killed by smartphones.

Oddly enough the camera get quite the module at the back and the color of the Power button feels like Google Pixel material. I actually like the device more on black and the bottom gray part feels like an Alcantara piece taken from a Microsoft Surface machine. The Beats Maestro is designed for lossless music with Dolby Atmos and an optimal listening experience. There’s 5G here, probably an Apple A13 or A14 CPU and maybe a LCD screen, since OLED would be overkill at this level.

The price will be key and the presence of bundled headphones. I’d say that $299 makes sense and maybe a bundle with AirPods at $499 may be a hit.

About Kelvin
Passionate about design, especially smartphones, gadgets and tablets. Blogging on this site since 2008 and discovering prototypes and trends before bigshot companies sometimes
iPhone SE 2023 Concept Gets Rid of the Notch, Gets New Camera Design   Apple Watch Series 7 Leaked in Renders; Here’s What’s New