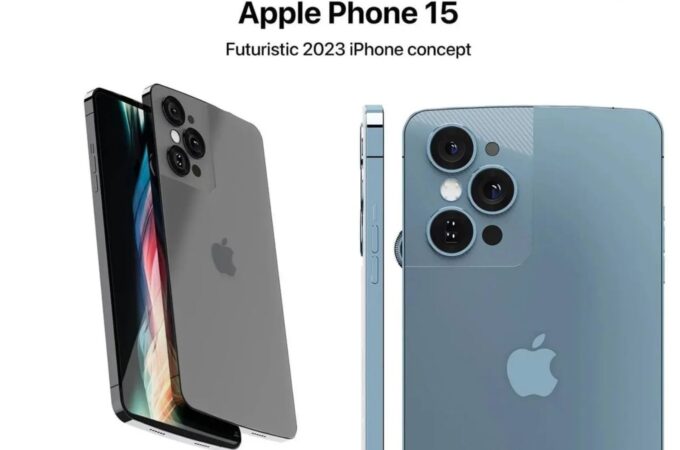 We’ve seen our share of crazy iPhone concepts, but there’s a special place in our hearts for the creations of designer Antonio de Rosa. When he tackles Apple it seems we’re dealing with Jony Ive himself, at least as far as courageous choices are concerned. Now he’s conceived an Apple iPhone 15… with a scroll wheel.

There’s also the long awaited periscope camera we’ve seen in rumors for a while now. The camera module has been expanded, but it no longer protrudes now. The flat frame stays and the device looks impossibly slim. It also has as a more angular overall format and a protruding scroll wheel on the side. There’s no clear purpose for the scroll wheel, but it could be for the camera zoom or for navigation.

It’s definitely not for audio volume, since we have two such dedicated buttons on the side. Now as far as the back camera goes, it’s still a triple affair, but actually the telephoto camera is a “twin periscope”, with 80-240 mm focal length, 12x optical zoom, F/3.6 aperture and 8 element lens. And yes, it would appear that the Magic Wheel controls it. Two versions of the iPhone 15 are shown here, in 6.1 inch and 6.7 inch versions, with an impressive 144 Hz screen refresh rate.

The devices appear to be portless, meaning that wireless is the way to go this time. The notch is also gone, replaced by a protruding “lip” at the top side. If there’s one thing that this concept has is courage and originality. Judging by the pics, the device seems a bit wider now.

About Kelvin
Passionate about design, especially smartphones, gadgets and tablets. Blogging on this site since 2008 and discovering prototypes and trends before bigshot companies sometimes
Factors to Consider When Purchasing New Bath Pillows Online   The Edge of Mobile Casinos in Finland