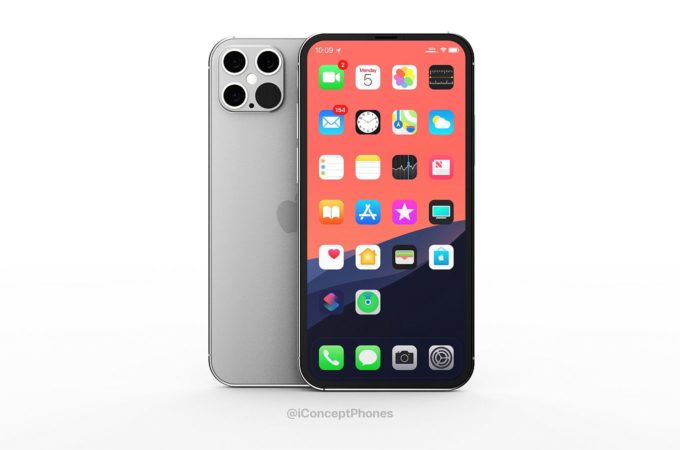 Hasan Kaymak is one of the more experienced phone designers we’ve worked with over the past decade or so, rendering a few quality smartphones, especially HTC units. Now he’s back with a new project, that involves an unboxing of the iPhone 12 Pro Max. The resulting video not only shows a new identity for the iPhone, but also for the packaging. Check it out below!

This iPhone 12 Pro Max is a bit of a beast, between the 5 nm CPU and 8 GB of RAM inside. It’s all conceptual artwork and wishful thinking of course. As per the leaks, the handset gets a pretty prominent metal frame and unlike the leaks, it appears in new and vivid colors, including a bright red. The back is very glossy now, unlike the iPhone 11 generation which was matte. The box is rather tall and wide and there’s a brand new booklet inside.

The prominent and protruding frame feels like a throwback to the iPhone 4 or iPhone 5 age and we also get a bigger Silent button now. Hasan has put a 12 megapixel Facetime camera at the top and tried to avoid the notch as much as possible. This iPhone concept sports an USB-C port, wireless charging, an ultrawide camera, LiDAR sensor and a stainless steel frame. It has WiFi 6 and 5G, plus an Apple A14 Bionic chip, a 5 nm CPU.

Storage goes as high as 2 TB and the wireless charging is of the 30W variety, which is pretty fast. 6.1 inch OLED versions and 6.7 inch OLED versions are being prepared and guess what… NO NOTCH! Hues include Lavender Blue, green, rose gold, red and more. I see that there’s a fingerprint scanner in the screen now, with any area of the display being used as such. There’s a quad camera at the back and the only thing I don’t like here are the thick bezels, otherwise I’m sold. More details can be found on the designer’s website.

About Kelvin
Passionate about design, especially smartphones, gadgets and tablets. Blogging on this site since 2008 and discovering prototypes and trends before bigshot companies sometimes
Samsung Galaxy Note 20 Leaked by Samsung Twice In One Week   Samsung Galaxy Fold 2 Gets New Design Concept With Rotating Camera and Narrow Bezels