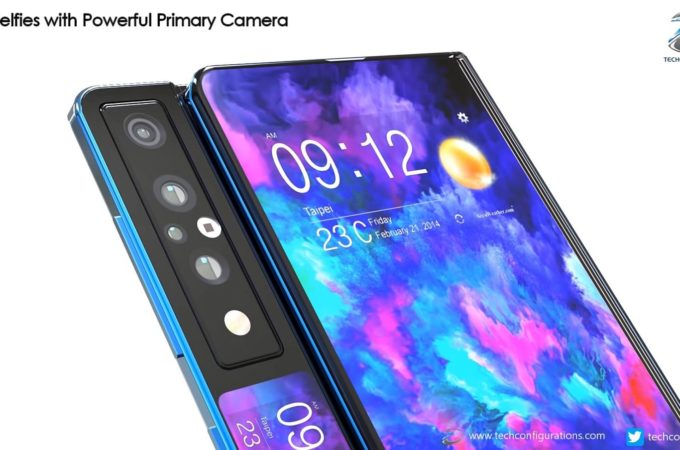 Techconfigurations doesn’t post concept phones often, but when they do, they really knock it out of the park. They’ve just come up with a Samsung Galaxy Fold 2 that looks perfectly believable and integrates a smart rotating camera, which I actually like. Let’s check it out below!

First of all, the new foldable phone sounds small at 6.6 inches, but that’s just the main display in the folded mode. The opened up laptop mode provides an 8 inch OLED panel. There’s also a bit of a side display and above it rests the rotating camera mechanism, which you can have either as selfie or main camera. There’s also wireless charging and reverse wireless charging support, as well as a huge 7000 mAh battery, 5G and 65W fast charging. The cool part is the way you can use the small side screen, including the display of in game stats and YouTube comments.

The laptop mode from the Galaxy Fold 2 also comes in handy, with the lower part being a QWERTY keyboard and the top part the actual screen. Gone are the notches and cutouts, there’s no need for those. Bezels are very narrow and the hinge edges/caps are almost invisible. This probably looks better than what Samsung has prepared for its August unveiling. I see a lot of metal here, glossy parts, glass at the back and front, hopefully some UTG protection too. The back camera seems like a quad affair and the color choices include purple, red, green and a few more.

No trace of stylus, in spite of what we’ve heard lately, but that can be bough separately probably. I’m sure more concepts of the sort will come in the near future. Good job Techconfigurations in the meantime! That $2000 price tag sounds scary and plausible at the same time.

About Kelvin
Passionate about design, especially smartphones, gadgets and tablets. Blogging on this site since 2008 and discovering prototypes and trends before bigshot companies sometimes
iPhone 12 Pro Max Already Gets Unboxed in Hasan Kaymak’s Renders and Video   Sony Xperia 5 II is Already Here, More Compact and Powerful Than the Predecessor