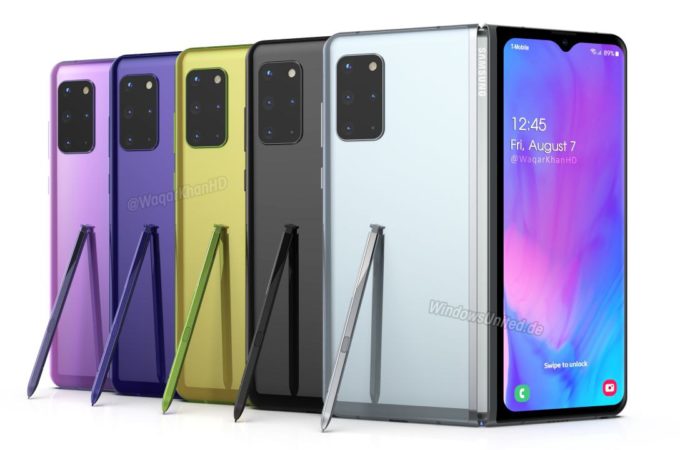 Samsung Galaxy Fold has been selling for many months now, in version 2.0 actually, that gets rid of some of the problems of the first Fold. In the meantime we’ve had the Samsung Galaxy Z Flip debut, for a new design paradigm, that involves a flip phone which is also a foldable phone. The Galaxy Fold 2 is still on the table, in the making and one designer has a pretty good idea of what it will look like.

Waqar Khan is basing his renders on previous patent documents, rumors and inside info, generating the renders you can see here. At its core, the design hasn’t changed very much, but there’s some bits and pieces which clearly show you this is a different machine. For one thing the notch is gone from the main screen, replaced by a punch hole selfie camera. Then on the external screen, which is now bigger we get a teardrop notch for another selfie camera.

The device also gets a stylus in the mix, but I’m not very sure if there’s also a special slot for it or not. As you can see the Galaxy Fold 2 also borrows the iconic camera from the Galaxy S20, or rather the S20+, but it adds one extra sensor, since there are 5 sensors in here. The designer even mentions a 108 megapixel camera and a 100x zoom camera, even though I can’t quite spot them at the back of his creation. The hinge doesn’t seem to change that much, or the bottom and top parts of the phone.

I expect some elements to be borrowed from the Galaxy Z Flip, like the plastic protection on top of the glass protection for example. Inside we should get up to 16 GB of RAM, a Snapdragon 865 processor and also we should have 5G connectivity in the mix here. Expect a 2000 euro price tag, new color choices and hopefully smaller screen bezels, since those were bigger than I expect when I first saw the Galaxy Fold 1. Of course, the Covid-19 pandemic may affect the debut schedule of the device, but until further notice, it should come in August or September.

About Kelvin
Passionate about design, especially smartphones, gadgets and tablets. Blogging on this site since 2008 and discovering prototypes and trends before bigshot companies sometimes
Essential Phone 2 and Essential Phone 3 Concept Images Brought to Life By Leak   Xiaomi Mi Alpha Flip is Finally the Foldable Flip Phone We’ve Been Waiting For