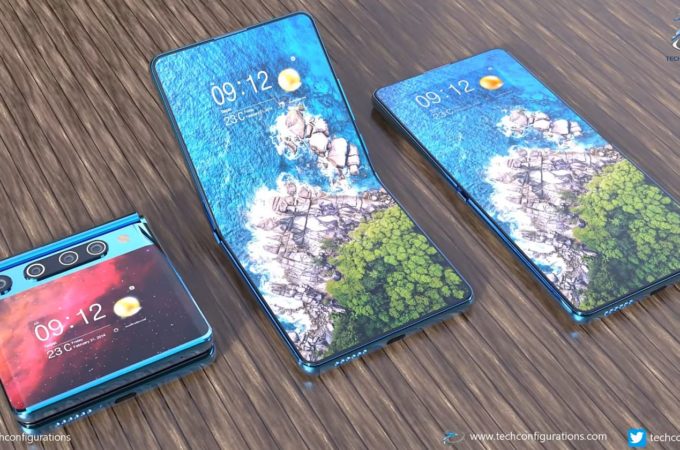 We’ve been waiting on a Xiaomi foldable phone for over a year now and there have been leaks and patents showing that Xiaomi is indeed working on such a device. However, lately they’ve focused on something else. Luckily, some passionate designers still have enough inspiration to show us what a Xiaomi foldable flip phone would look like. One of them is Techconfigurations.

Techconfigurations envisioned the way a so called Xiaomi Mi Alpha Flip would look and function. Basically it seems to draw inspiration from both the Galaxy Z Flip and Moto RAZR 2019, but takes the specs up a notch and increases the size of the external screen. The Xiaomi Mi Flip is also a 5G device, one that comes with a revolutionary hinge. I see it has some sort of “lids” at the ends which is Motorola’s approach, not Samsung’s. It also has an abundance of cameras at the back.

Those include a 108 megapixel main shooter, a telephoto 12 megapixel camera and a 20 megapixel ultrawide camera, as well as a 12 MP depth camera, so we’ve got a quad camera setup here. There’s also 10x hybrid optical zoom, a big achievement for a foldable. Not sure if placing them so close to the hinge is doable, though. The main camera also functions as the selfie camera, aided by a big external screen. It’s about one third of the diagonal of the large screen upfront.

Among the specs listed by Techconfigurations there’s a huge 5500 mAh battery, with 65W fas charging, a Snapdragon 865 processor, 12 or 16 GB of RAM (LPDDR5) and up to 512 GB of internal storage. We also see a bunch of hues for this newcomer, like bright red, blue, purple and brown. I feel that the shades are too glossy and this device would light up too much in the sun. Hopefully, it’s better built than the Moto RAZR 2019…

About Kelvin
Passionate about design, especially smartphones, gadgets and tablets. Blogging on this site since 2008 and discovering prototypes and trends before bigshot companies sometimes
Samsung Galaxy Fold 2 Gets Very Believable Set of Renders From Waqar Khan   Samsung Galaxy Note 20 Ultra Gets a Penta Lents Camera in This New Concept