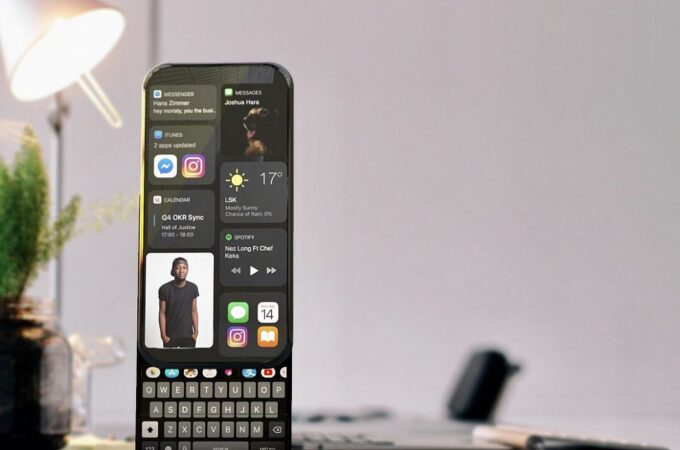 First of all, this feel like a slider phone, the kind of which we haven’t seen in a while. I guess that BlackBerry and Palm were the last trying such a thing. The screen slides open in order to reveal both the hidden front cameras and a secondary screen. It also rotates at 90 degrees for a landscape experience and improved gaming on the go, plus streaming and typing using the secondary screen. Sliders are prone to breakage, because people with feeble nerves tend to play with the sliding mechanism and damage it.

Apple knows that and they would never risk a too intricate mechanism. That’s why they’re staying away from foldables for now. It’s enough that their batteries get drained fast, the slider is the last thing they need. The concept looks cool and all, but in order to use the front camera you need to rotate the main screen at 90 degrees. I see that some of the aesthetics of the older iPhones are back and I’m not talking about the iPhone 4 or 5, but rather the 3G and 3GS, with the shiny rounded edges and body.

Not sure about cutting the screen corners in such a curved manner though… At least this iPhone 14 is trying something different compared to the norm these days so Kudos Michael Muleba for being bold. The materials for this smartphone would be key in its making. It could end up heavy and thick, but plastic is also not a very good option.

About Kelvin
Passionate about design, especially smartphones, gadgets and tablets. Blogging on this site since 2008 and discovering prototypes and trends before bigshot companies sometimes
Vulpex TokenCore Brings Back the Idea of Modular Smartphone   Nokia 9.3 5G Would Probably be Better Than What HMD Churns Out in the Fall