iPhone 6 With New Approach: Record Video While Listening to Music

This iPhone 6 concept has been created by Deviantart member CFT0 and it involves a brand new concept, that’s rather simple: the device allows you to record video while listening to music. The design is also pretty appealing, but nothing we haven’t seen before. 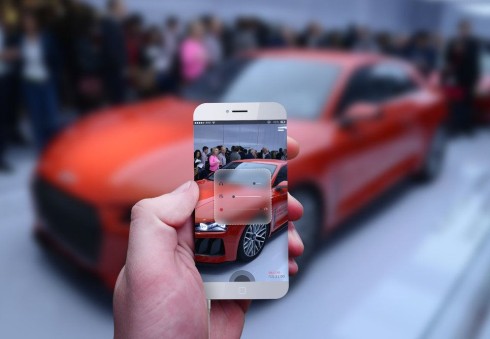 The device is rendered as an edge to edge display unit, with a slim waistline and a very discrete Home button. You can listen to music while recording video without any interference, which is kind of cool. The bigger screen estate actually looks nice and this is a longer iPhone than before, probably with a 4.5 inch or 5 inch screen.

Apple would have to be very careful about the sides of an edge to edge display, since they would pick up any touch as input, unless software told them otherwise. Just add an extra sensor on the sides and we’re all set. The iPhone 6 should feature the same usual metallic case, a 64 bit CPU and probably more RAM and more megapixels for the cam sensor.

About Kelvin
Passionate about design, especially smartphones, gadgets and tablets. Blogging on this site since 2008 and discovering prototypes and trends before bigshot companies sometimes
Nokia Smartwatch Project Started, at Least as Renders   Samsung Galaxy Tab Round Curved Tablet Gets Rendered, Based on Patents