The series of mockups and mockery regarding the iPhone 6 Plus bending issues (#bendgate) continues, this time with a device that’s part jest and part concept. Created by Jermaine Smit, the iPhone 6 Bend is shown below and even gets a presentation video. 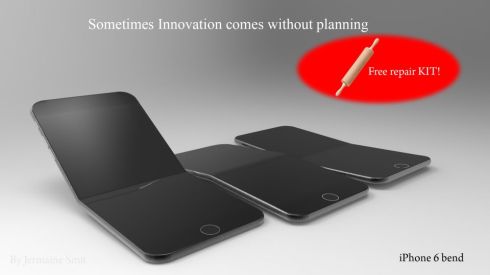 The handset has a familiar design, but also has the ability to slightly bend at its middle part, sort of like a recliner. What I like most about this concept is the way the raw metal is sticking out of the sides of the phone. If this is supposed to be a real phone, I guess that bending it in the middle is not a good idea, since it would decrease the structural integrity of the iPhone 6 Bend. If there’s actually flexible technology behind, like the one of the LG G Flex, it may work… or not.

If it’s a joke (which it probably is), then Apple fans will surely get angry about it. In the end it’s all caused by 9 people saying their iPhone 6 Plus units were bent… Should we make such a huge fuss about this? What about the LG G3 cracked lower edge? What about the HTC One chipping? And what about the Sony waterproof tablet that wasn’t waterproof? Also, what do you think of the iPhone 6 bend repair kit?