In case you’re wondering “why doesn’t this concept look like the Motorola Shamu?”, well it appears the designer made this Motorola Nexus 6 before the leak. Teshan Nanayakkara is the creator of the smartphone and he keeps the rounded top and bottom that are typical to a Nexus unit. 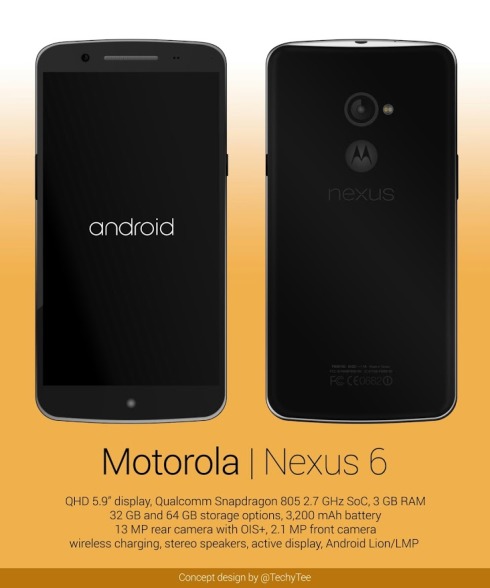 This model reminds me of a Nexus 4 and I can see there’s a dual LED flash placed at the back, together with a dimple with the Motorola logo on it. Motorola Nexus 6 integrates a Quad HD 5.9 inch display, as officially rumored and it also adopts a Qualcomm Snapdragon 805 2.7 GHz processor, 3 GB of RAM and 32 or 64 GB of storage. There’s a 3200 mAh battery inside, a 13 megapixel camera at the back with OIS+ and a front 2.1 MP shooter.

Nexus 6 comes with wireless charging, stereo speakers (probably placed at the front), active display and Android Lion as the OS. I can’t tell if this model has glass, plastic or some other material at the back, but what I can tell is that the facade reminds me of an elongated Galaxy Nexus, which is not exactly a bad thing. The bezels are kind of big though for current standards…

About Kelvin
Passionate about design, especially smartphones, gadgets and tablets. Blogging on this site since 2008 and discovering prototypes and trends before bigshot companies sometimes
HTC One M9 2015 Rendered by Hasan Kaymak Innovations (Video)   iPhone 6 Bend Is Here, Complete With Video