Every other week or so we get a HTC One M9 concept in the mail, but none as detailed as the ones created by Hasan Kaymak. He even goes through the trouble of creating a packaging for the device and there’s also a video of the 2015 flagship below.

The specs are bit overkill, but overkill is the name of the game nowadays, right? We’re dealing with a HTC One M9 2015 concept that features a 64 bit octa core processor, 4 GB of RAM and a huge 6200 mAh Lithium-Sulfur battery. It has a Quad HD 5 inch screen, a 21 megapixel rear camera with LED flash and a front 5 megapixel shooter for selfies. There’s a Duo microphone on board and a multifunctional kickstand.

The kickstand works as a cover for the nano SIM and microSD card slots and we’ve got pogo pins to add external adapters, like an LED flash at the front or back. You can also attach an external battery, external camera and other pieces. The body is made of aluminum, as far as I can see and the HTC One M9 also brings a fingerprint scanner and a heart rate sensor. BoomSound speakers are obviously here, but if you ask me, the really cool part of this smartphone is its modularity. 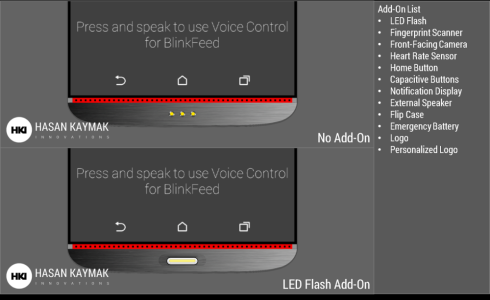 About Kelvin
Passionate about design, especially smartphones, gadgets and tablets. Blogging on this site since 2008 and discovering prototypes and trends before bigshot companies sometimes
Martin Hajek Creates Bent iPhone 6 and We’re Not Even Joking   Motorola Nexus 6 Rendered by Teshan Nanayakkara