Meet the iPhone 6, in yet another fragrance, this time coming from “Designed by M”. Be gentle with this render, since it’s their first design, after all. The handset is rather rectangular and has an angular shape with a lot of straight edges. 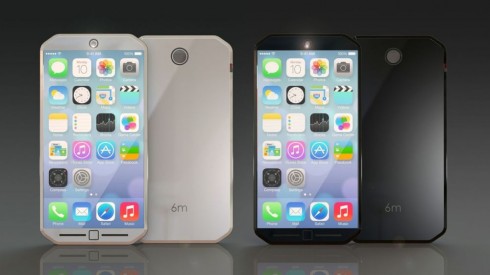 For some reason the camera has been placed at the center this time, not the corner and there seems to be no flash. This iPhone 6 feels like it has a bigger display than the 4 incher on the iPhone 5S, if you ask me. The phone is actually called iPhone 6m, as a tribute to its designer. The device replaces buttons for volume with touch sensors and the same goes for the On/Off button and Home button.

The front camera and the earpiece are wrapped around each other, in a double banded circle, according to the designer. Most importantly, this smartphone is very thin, at 5.5 mm, actually it’s 20% thinner than the iPhone 5S. Another piece of novelty is the 18 megapixel camera at the back, with a special low light mode and panorama feature. Just when I was saying that the flash was gone I found out that it’s actually integrated as a ring around the camera.

Would you buy this concept iPhone?

[via Designed by M]