Keith D. Gutierrez imagined the way a Microsoft phone could look like, so he created this Windows Phone concept you see below. It’s clearly Lumia inspired with the yellow case and styling and all, but it’s also thinner than the latest Nokia high end phones. 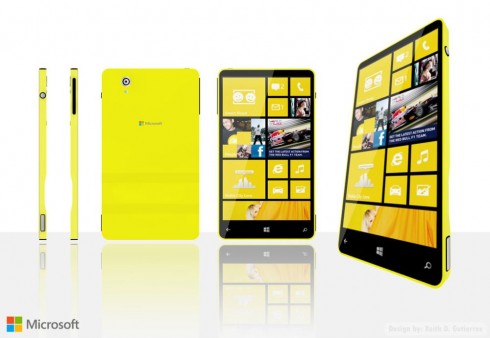 The designer used Sketchup and SU Podium V2 for these renders and the result is a nice looking device, that for some reason has a curved lower area. It may be used for wireless charging or attaching other accessories, for example. The camera is discretely integrated at the back and we’ve got a Microsoft logo on the device, which doesn’t happen very often, even with Microsoft’s gear.

The keys seem metallic, which is something Nokia is usually cheap about and the screen may enter 4.7 inch or even 5 inch territory. We’ve given up on the idea of a Surface Phone, lacking any solid proof about, so we have to be content with such concepts. Do you like it?

About Thrystan
Sony Xperia Concept With Attached Lens and Sensor Could be the Future   iPhone 6 Concept Adopts an Angled Design, Comes From “Designed by M”