There’s a new iPhone 6 concept out there, finally one that doesn’t simply involve a rectangle and some specs. We’re talking about an iPhone with a foldable screen here, one that can turn into a tablet basically, as the images below show. 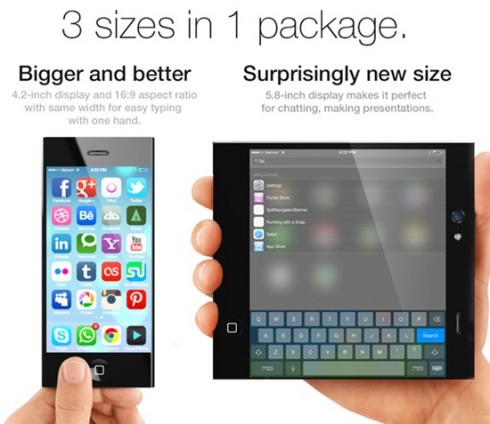 Designer Pritesh Chavan created this design, an unfolding phablet-type device, that creates a tablet by opening up its displays. The concept is based on a flexible display and in its original form, the handset is an almost edge to edge iPod-looking thingie with a 4.2 inch 16:9 screen. Then, you fold it open and make a 5.8 inch phablet, that actually looks kind of hot.

Then you open it up some more and create a sort of Mini iPad Mini, with a 7.5 inch diagonal and 16:9 aspect ratio. There are full edge speakers for surround sound and swipe controls on the bottom to control sound. The only problem with this iPhone 6 mockup? It kills the need for both an Apple phablet and a tablet, which they won’t ever risk.

[Via Redmondpie and Yanko Design]