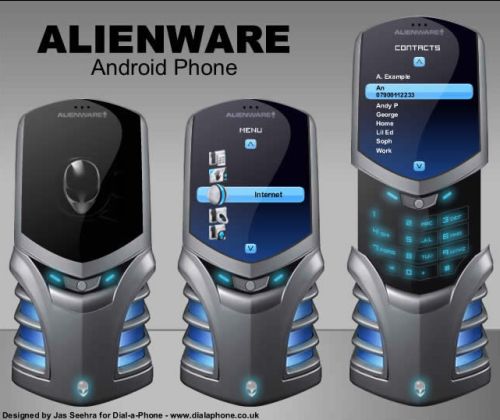 Seems that the Android platform finally has a “father”, courtesy of Google and Dell and the device is closer to its launch than you might have thought. This is not Dell’s first shot at launching a mobile phone, but let’s say that their PDAs were pretty much the reason for lack of enthusiasm these days. You’re probably wondering what’s the deal with that “Alienware” associated with the Android brand. Well, Dell bought Alienware, which you might know as one of the best tech companies ever, specially when it comes to gaming and multimedia. What you see above is an Alienware Android concept mobile phone but if you want to check out its specs, you’ll have to read the rest of this entry.

The device features the superb Alienware design, plus a large display with a generous resolution and obviously video gaming support. It’s based on the Google Android platform and its multimedia features will one-up the iPhone, or so hope the folks of Dell. Seems that we’ll see this Android phone this summer, at a fairly decent price and I’m pretty curious to see what the device can do, in terms of gaming and audio/video features.

About Thrystan
Chute Concept Phone, Made Out of Bamboo   Sony Magazine Announces the PSP Phone?!