The web has been abuzz today with the image below, supposedly showing a mockup of the first BlackBerry 10 phone, the rumored BlackBerry London. I’ve heard about this phone before and it was nowhere nearly as cool as the one on in this picture. We’re dealing with an ultraslim device (somewhere around 8mm I guess), with a front camera and an OS that also provides support for ported Android apps. 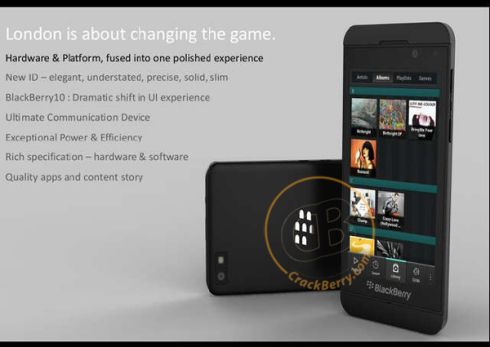 The inside source claiming to be in the know about the BlackBerry London says that RIM is thinking about either the TI OMAP5 or the Qualcomm processor in this phone, both in the 1.5GHz flavor. I also expect here an 8 megapixel camera, a 4.3 inch display, business features, 16GB of internal memory, 1GB of RAM and maybe even LTE. I wonder what’s the deal with the UI shown here, that’s very clean and simplistic, something that let’s face it BlackBerry OS never was.

What would a prefect BlackBerry look and sound like to you?