Now that the entire web has find out that Samsung will NOT the Galaxy S III smartphone to MWC 2012, it’s time to check out other rumors. I’ve seen my share of Samsung Galaxy S III concepts and renders, but the picture you see below is quite new to me, so let’s take it as a fresh leak, if you will. I have no idea what this prototype/mockup is, but it looks like something Samsung would do. 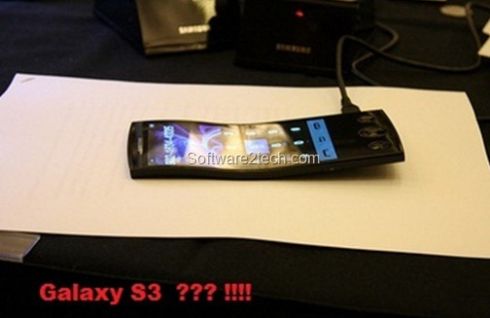 It’s curved a bit, hinting at a flexible AMOLED display maybe, although I’m sure we won’t see that on the Samsung Galaxy S III. Rumors have agreed that we’re waiting for a quad core Exynos CPU smartphone, with a 4.6 inch 720p display, a 12 megapixel camera and Android 4.0 Ice Cream Sandwich as the OS. Other extra features that people seem to like are 2 GB of RAM and a 3D display, but I can’t guarantee we’ll see them on the new flagship from Samsung.

If you have any idea who created the phone in the image above, feel free to give credit where it’s meant and help us figure out what brand this device belongs to. In other news, Samsung promised to launch the Galaxy S3 separately from the MWC event, in a conference that will take place sometime in the first half of 2012. Excited?