Straight from Jonathan De Jesus and Crescent Mobile Technologies comes a new concept phone called Crescent Zuess. We’re dealing here with a futuristic phone with an unusual design and packing 2.5 GB of RAM, as well as a 12 megapixel camera. The device has a 1080p AMOLED display and 4G LTE connectivity. 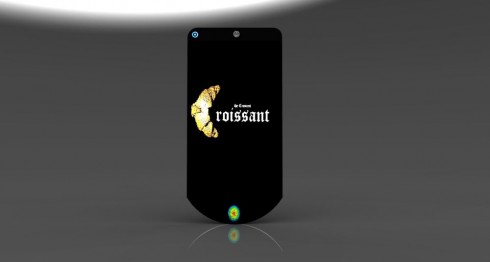 It’s powered by solar charging (optional) when the phone is off and its case is made of carbon fiber and aluminum. There’s a volume strip on the Crescent Zuess that’s sensitive to touch, for control. You can also use finger scanning to lock or unlock the phone. The OS on board the Zuess is called Croissant OS and the voice control app is called Benson. You should also know that the designer of the smartphone said that the camera has manual focus and autofocus settings, plus auto settings that arrange the camera settings in a perfect way.

There’s apparently a secondary back screen, that shows the battery life and other hardware features of the phone in real time, maybe stuff like temperature and all that. Finally, Bose audio tech is included, plus a solar panel strip on the top of the phone and bottom in order to get the solar charging mentioned above. The device seems to be very thin and very sharp and rounded at the same time at the bottom. In case you’re wondering we’ve received several other Crescent Mobile concepts and you can see them here.