Domino Nexus Zero, the Next Step in Big Display Smartphones

Guess what I found today on Deviantart? A brand new Nexus concept phone with a huge camera sensor and high end specs, plus a giant display. This is a 6 inch handset called Domino Nexus Zero, that has been created by DoctorTimmy from Deviantart. 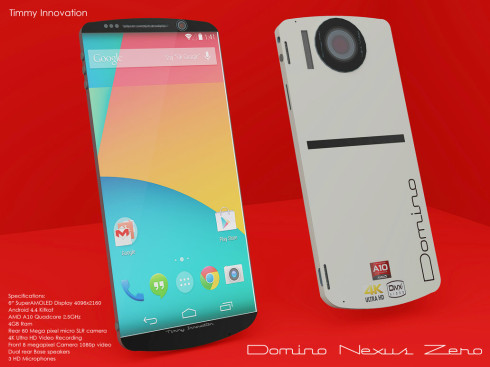 This incredible render of an elongated phone with edge to edge screen features a 6 inch Super AMOLED 4K display and Android 4.4 KitKat. There’s also an AMD A10 quad core APU clocked at 2.5 GHz, 4 GB of RAM and a huge 60 megapixel back camera with micro SLR abilities. The cam does 4K video recording and we’ve got a front 8 megapixel cam with Full HD video capture as well.

Domino Nexus Zero integrates dual rear Bose speakers with micro subwoofers and the designer included here 3 HD microphones with noise canceling. This Nexus concept phone packs 250 GB of storage, a microSD card slot and boy I really can’t get over that camera! How would AMD ever deliver such a CPU?

About Kelvin
Passionate about design, especially smartphones, gadgets and tablets. Blogging on this site since 2008 and discovering prototypes and trends before bigshot companies sometimes
Samsung Galaxy Gear 2 Gets Full Picture Gallery and Rendered Next to Galaxy S5 (Video)   Nexus 6 Render Feels Familiar, Reminds Me of Nexus 4 a Bit