If so many names in a headline got you confused, you should know that designer Gabriel Prero has the teens’ preferences all figured out in his concept design. The Firely Multi-fly is featured on Coroflot and promises to be an alternative for your Sidekick, RAZR, PSP, iPod and Nintendo DS. It’s a concept phone that targets the youngsters, the so-called “tweens” who change phones every year or so. 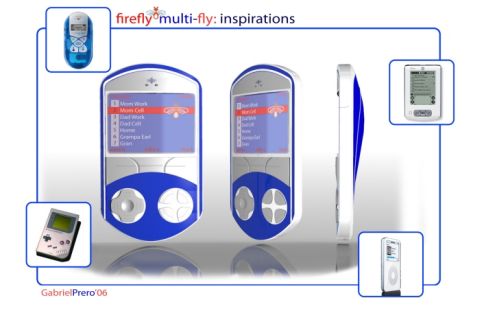 Studies have shown that tweens give up their handsets in favour of others every 18 months, so Firely Multi-fly tries to solve this issue. It can even appeal to a child and it’s got parental controls, so it’s a fine alternative to the Heart Phone. This concept is also up for gaming sessions, as it resembles an old-school Game Boy, but puts on an entirely different game.

The list of features doesn’t end here, though, as the handset can use expandable accessories, just like the iPod’s gear and even cartridges for games and other functions. If you thought that the Modu phone was unique with all of its jackets, wait till you see this! Firely Multi-fly comes with a camera cartridge and interchangeable keypad, so it can morph into a console, iPod or cameraphone at any time.