Ever wanted to control your cellphone with one hand only? Ever tried doing that and ended up writing poor text messages? Thought so. Mitsumi now has a sollution for you, materialized in the haptic input device you can see in the following image. 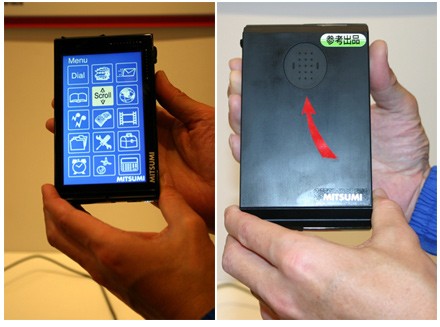 This device will be placed on the rear of your handset and it will basically give you one-handed control for your phone. The prototype is a tad thicker than we would have expected but Mitsumi promised to release a thinner commercial version. Meanwhile, as Engadget mentions, Mitsumi’s concept includes “a sheet with small protrusions, a resistance sensitive touch pad and switches”.

About Thrystan
Nintendo DS 2 Concept, Too Good to Be Untrue   SaY Mobile Phone is One Funky Fresh Concept