What are the odds of finding yet another Nexus X concept just hours after the first one? Well, we did find one, this time a smaller and more normal device, created by Matteo Lobello. He envisions a slight upgrade of the Nexus 5, apparently. 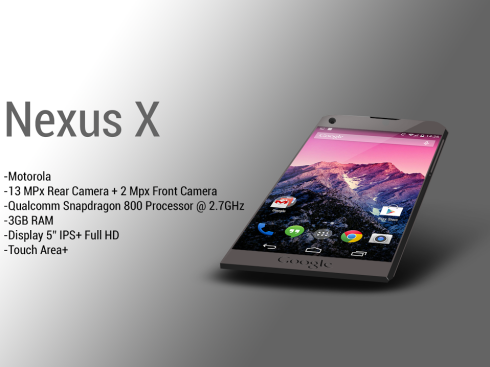 The Nexus X shown here has a 13 megapixel rear camera, 2 megapixel front shooter and a Qualcomm Snapdragon 800 processor clocked at 2.7 GHz. There’s 3 GB of RAM inside, a Full HD IPS 5 inch screen and a Touch Area+ system available here. The camera upgrade from the Nexus 5 is logical, while the CPU could be a bit better since there haven’t been two Nexuses with the same CPU until now.

The screen is also pretty much the same as the 2013 Nexus phone, so maybe a 2K 5.2 incher would sound more realistic, if I can say so. That Touch Area+ sounds interesting, but I have no idea what the designers is refering to. Maybe to the fact you can interact with other areas of the case?

About Kelvin
Passionate about design, especially smartphones, gadgets and tablets. Blogging on this site since 2008 and discovering prototypes and trends before bigshot companies sometimes
iPhone 6 Air Render is Basically a Sheet of Metal (Video)   Nexus X Smartphone is Made from Single Piece of Matte Stainless Steel