Although this concept is about one year old, it’s still a good idea even today. I’m talking about Ubuntu for eye wear, that’s detailed in the image below. It’s created by Lorenzo Berkley and it’s a very nice idea for an UI. 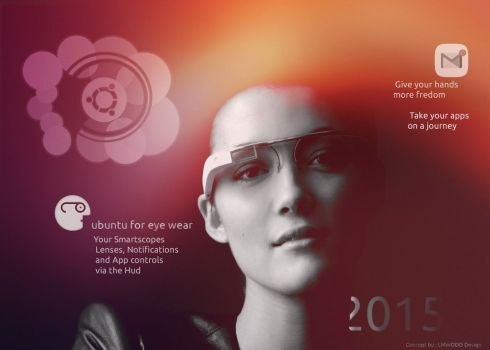 The Unity Hud is supposed to be a system integrated application controller that involves a searchable menu context viewer and it’s paired with keyboard shortcuts. There’s voice control and desktop class functionality on phone and tablet applications. Hud Glass is an extension of the concept, that allows apps to run without a graphically intensive environment.

We will get an active voice controller for Ubuntu and the whole idea here is to create a software application concept for the moment when Ubuntu will run on Google Glass. I can’t exactly say I like the UI of Google Glass, even though it got some praise. There’s still work to be done and Ubunty may be the answer.

About Kelvin
Passionate about design, especially smartphones, gadgets and tablets. Blogging on this site since 2008 and discovering prototypes and trends before bigshot companies sometimes
LG Announces Weirdest Phone Ever: LG Aka…   Apple Thermostat Imagined in Germany, Inspired by Marc Newson’s Work