This is a lazy August, that’s for sure, since both the leaks and concept phone releases have slowed down. That’s how I came across the following concept smartphone, made by Deviantart user Arthus53. I was looking for something new, unique and out of the ordinary and I found this device: 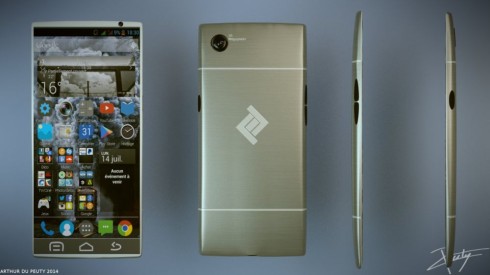 The designer made this phone with the Blender 2.71 software and he envisioned an elongated device, with a curved upper and lower side and segmentation at the back. The volume buttons are also uniquely shaped and separate, unlike the current trend of making them one big button. At the back of this mystery phone there’s a 16 megapixel camera and the OS here seems to be Android.

There are also some capacitive buttons at the bottom, but they’re not rendered very well in my opinion. This model has a metal case and it’s very narrow for a modern handset. It has an on/off button on the side and the overall form factor feels like a HTC One that met an iPhone and got slimmer and narrower down the way.

About Kelvin
Passionate about design, especially smartphones, gadgets and tablets. Blogging on this site since 2008 and discovering prototypes and trends before bigshot companies sometimes
HTC One M9 Gets Designed by Hasan Kaymak Again; Here’s a 3D Render (Video)   Holla is a New Wearable Gadget Concept With Modern Look