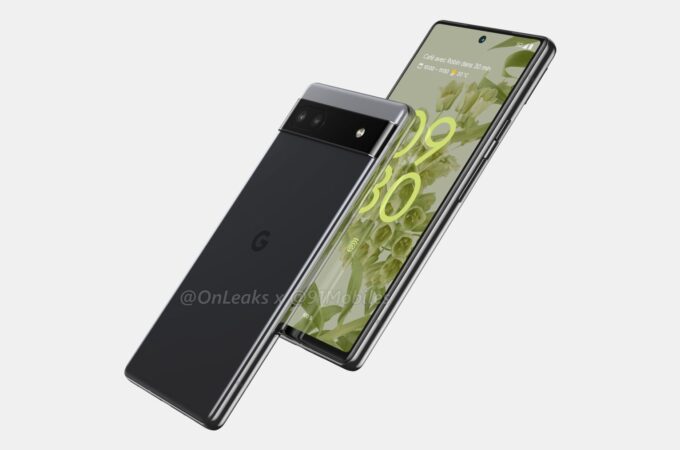 Google unveiled the Pixel 6 and Pixel 6 Pro with its Tensor CPU last month and now there’s already a continuation of the series. The Google Pixel 6A has just leaked and it appears to be more of the same, but on the lighter side. It was leaked by @OnLeaks and 91Mobiles and we have more shots below.

According to the source, the device measures 152.2 x 71.8 x 8.7 mm, which goes to 10.4 mm with the rear camera bump. This time, the Google Pixel 6A provides a 6.2 inch OLED screen with a single centered punch hole. There’s also an embedded fingerprint scanner here, within the screen. There’s a Power button and a volume rocker on the right side, while an USB-C port is placed at the bottom, together with two grilles.

We also find a SIM card tray on the left. This is a supposed to be a reliable midrange phone with Android 12 and support for 3 years of software updates. I wouldn’t be surprised if there’s a main 50 MP camera here, plus an ultrawide 12 or 13 MP shooter. The predecessor had a Snapdragon 765G CPU, so we expect to see a Tensor Lite or a Snapdragon 778G processor.

6 or 8 GB of RAM are here, plus up to 128 GB of internal storage. The device lacks an audio jack and hopefully it also gets rid of the screen problems that are plaguing the Pixel 6 and Pixel 6 Pro. We’ve seen green screens, double punch holes and more issues. Also, the Tensor CPU isn’t as good of a performer as expected.

About Kelvin
Passionate about design, especially smartphones, gadgets and tablets. Blogging on this site since 2008 and discovering prototypes and trends before bigshot companies sometimes
Learn numerous applications in our smartphones that we love using for various everyday tasks   5 Mobile Commerce Trends That Will Dominate 2021