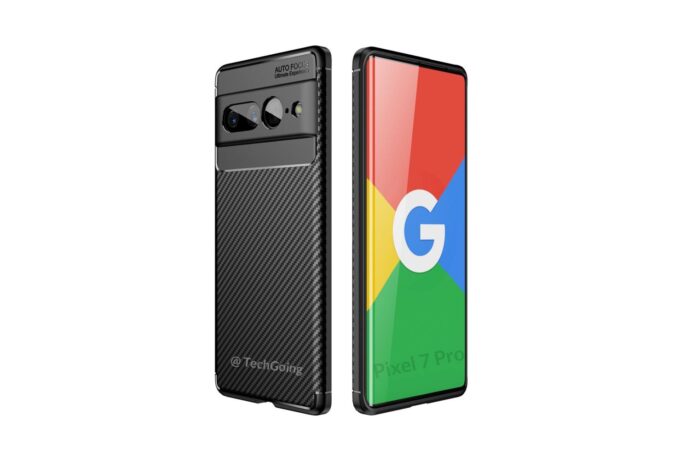 We’re just 4 days away from the big Google I/O event, but that’s not where we’ll be seeing the next Google Pixel flagship. No, the Pixel 7 is coming this Fall, while the Pixel 6a will drop next week at I/O. In the meantime we have a fresh leak of the Google Pixel 7 Pro design, courtesy of leaked case renders.

A October debut is expected and the Pixel 7 Pro has already been seen in CAD-based renders back in February. Now the looks shown in those images are confirmed by the newly released renders showing the phone in a case. Usually such renders are released by case makers trying to capitalize on the hype and generate sales. We do see the protruding camera “visor” stays untouched from the predecessor and we’re also getting a periscope telephoto camera.

Pixel 7 Pro looks quite a lot like the Pixel 6 Pro, to be honest. It’s said to feature a 6.7 inch QHD+ AMOLED panel with a 120 Hz refresh rate and a Google Tensor 2 CPU inside. The case shows the Power button on the right and also the volume rocker keys. The bottom hosts a speaker and USB-C port. Up to 512 GB of storage will be available and reports talk about colors like Stormy Black, Kinda Coral, Sorta SeaFoam and Cloudy White Shades.

We sadly don’t know much about the new Tensor CPU, but we need it to be a beast, since the first wasn’t all that powerful. The Pixel 7 Pro is also rumored to get a 50 MP main camera, 48 MP telephoto and 12 MP ultrawide camera. Is it just me or is the camera hump design getting old already?

About Kelvin
Passionate about design, especially smartphones, gadgets and tablets. Blogging on this site since 2008 and discovering prototypes and trends before bigshot companies sometimes
Motorola RAZR 3 Gets First Leaked Photos   How to Choose The Perfect Online Casino for Starters