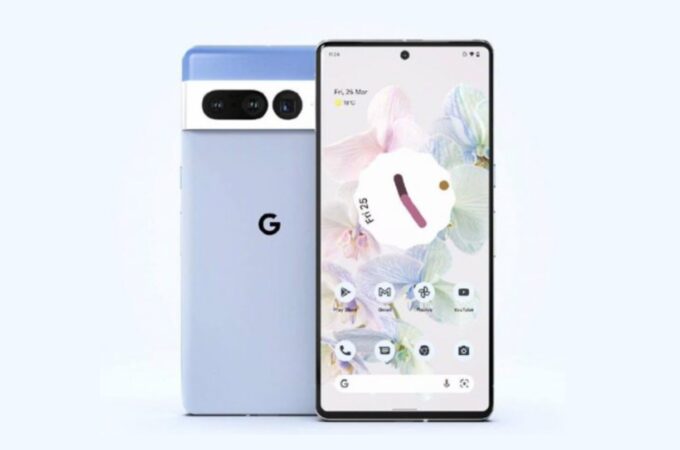 We’re no strangers to Google Pixel 7 Pro leaks, but today brings a new hue of device. It’s shown in sky blue and seems to continue in the same direction as the Pixel 6 Pro did before it. It’s a “hump camera”, as people like to call it.

Expected to debut in October, Pixel 7 Pro should inaugurate a new generation of the Tensor processor from Google. The way the camera block connects to the sides may remind one of the Galaxy S22 or the OnePlus 10 Pro. We also get to see the main camera and the ultrawide camera grouped together, while the periscope cam is shown on the right, cut off from the main ensemble.

The camera block is silver here, which is unexpected, since in the previous leaks it was always black, as it was on the Pixel 6 Pro too. The sides sport a silver shade, matching the camera block. It’s a stylish appearance, but it’s hard to tell a Pixel 7 Pro from a Pixel 6 Pro right now. Leaked specs so far don’t show many changes from the predecessor, with a 6.7 inch AMOLED screen, with 120 Hz refresh rate, probably a LTPO panel that goes down to 1 Hz.

It should run on Android 13 with some exclusive features, like real time caption, improved low light capture and new Google Assistant functions. Camera-wise, I find it hard to believe that Google will move away from the 4X optical zoom camera and it should stick to the same cam as the model before it. The 11.1 MP front camera is definitely due an upgrade.

About Kelvin
Passionate about design, especially smartphones, gadgets and tablets. Blogging on this site since 2008 and discovering prototypes and trends before bigshot companies sometimes
Apps that are actually better than the browser version   7 Top Tips for Creating a Functional Workstation at Home