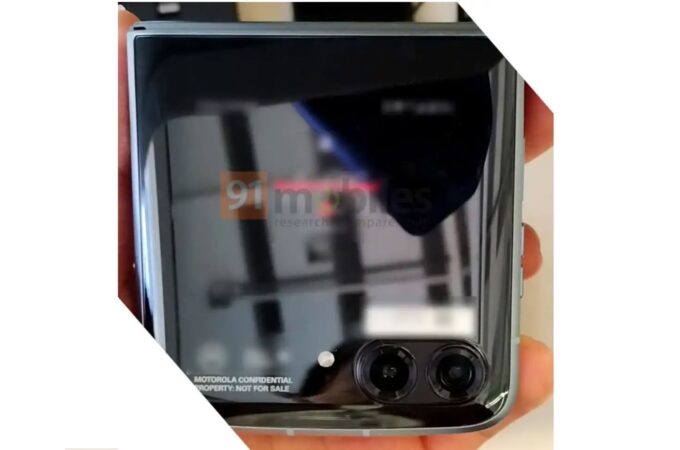 The sources mention a summer release for the Moto RAZR 3 and also some design changes. First all, the device is more similar to the Galaxy Z Flip 3 compared to the predecessors. It seems to have given up the big chin at the bottom, in favor of a flatter approach. The cover screen seems enlarged, perhaps even bigger than the Samsung one. We also get a dual back camera in lieu of a singular main camera, like the Moto RAZR and Moto RAZR 5G had.

The Motorola RAZR 3 camera will feature a 50 MP shooter and also a 13 MP ultrawide cam, while the 32 MP selfie camera will be integrated in the screen. By the way, the screen remains a Full HD+ one. Codenamed “Maven”, the device will be much more high end than its two predecessors. It has a Qualcomm Snapdragon 8 Gen 1 processor, 8 GB of RAM and 128 GB or 256 GB of storage and most likely a 120 Hz panel.

Expect a debut in China in July or August and it will be available in Quartz Black or Tranquil Blue. The price should be higher than the $1399 of the Moto RAZR 5G, much higher.

About Kelvin
Passionate about design, especially smartphones, gadgets and tablets. Blogging on this site since 2008 and discovering prototypes and trends before bigshot companies sometimes
Things to do on your new phone    Google Pixel 7 Pro Leaked Case Renders Show Us More Of the Design