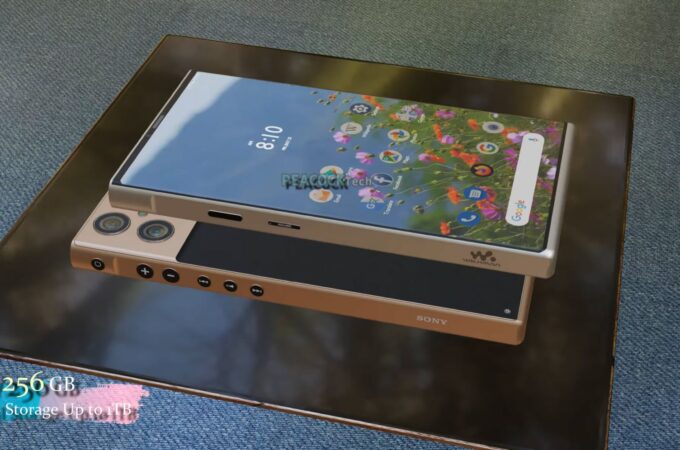 It’s shocking for me to think we haven’t had a Sony Walkman phone for a decade and still people dream of a new one. Luckily we have YouTube channel PEACOCK, who delivers a concept for a new angular Walkman, but it’s not a music player, rather a smartphone.

It’s also true that Sony keeps launching expensive music players, with gold contacts and connectors, plus more premium materials, that make the sound better. I’ll be honest, this is a weird phone, with a 5.2 inch Dynamic AMOLED panel, meaning it’s a rather small machine. It also has a 120 Hz refresh rate, an angular design, with a flat top and bottom and slightly curved sides. The Sony Walkman 5G is rather beefy, with a lot of technology crammed into a rather compact package, but also a thick one.

There’s a dual back camera here, a very narrow bezel screen and a set of high end specs. It has IP68 certification, 360 degree audio and lots of side buttons. I had to rub my eyes when I saw the battery capacity: 6500 mAh, but it sounds like a lot for such a small machine. It goes up to 18 GB of RAM and it has a digital amp inside. I particularly enjoy the red color version here, while the beige one is rather basic.

There are audio playback buttons on the side, a 24 MP front camera, Android 13 and a Snapdragon 8 Gen 2 CPU. The expected price is $1150. Interestingly, while the back side and the sides are basic, when seen from the front, this Walkman Phone looks like something that Essential or Nothing would make.

About Kelvin
Passionate about design, especially smartphones, gadgets and tablets. Blogging on this site since 2008 and discovering prototypes and trends before bigshot companies sometimes
How to Clean an iPhone Motherboard?   CBD Oil vs. CBD Treats for Your Pet