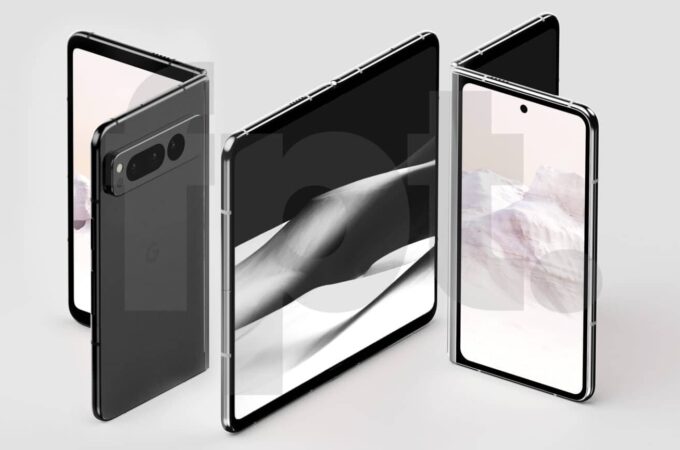 The Google Pixel Fold is going to be Google’s very first foldable phone and it has just leaked in a generous set of renders, courtesy of Frontpagetech. There’s something like a dozen renders here and the inspiration is clear: either OPPO Find N or Galaxy Z Fold 4.

Since Samsung makes the CPU inside the Google Pixel Fold, I wouldn’t be surprised if they also made this phone. I have a theory of my own saying that Samsung’s Galaxy Z Fold Lite has been rebranded to this device, but I may be wrong. I’m shocked to see the large bezels of the foldable screen, but apparently the top lip hosts a 9.5 MP selfie camera. The external selfie camera is also a 9.5 MP shooter. Available in black or white, the device will be launched in MAy 2023, at Google I/O 2023.

There’s even a price leaked, $1799, which is hefty and the equal of the price paid for the Galaxy Z Fold 4 in USA. The camera design at the back feels a bit like the Google Pixel 6 or 7 one, but without connecting the camera module to the metal sides. I also see no trace of a periscope telephoto camera here, so we’re probably getting a 3X optical zoom tele shooter, a 50 MP main cam and a 50 MP ultrawide cam. The fingerprint sensor is integrated into the side Power button.

My biggest question is whether or not this device has stylus support and a Google Tensor CPU or not.

About Kelvin
Passionate about design, especially smartphones, gadgets and tablets. Blogging on this site since 2008 and discovering prototypes and trends before bigshot companies sometimes
Exciting Tools that Could Help to Boost Your Business   Easy Ways to Make Extra Money at Home‍