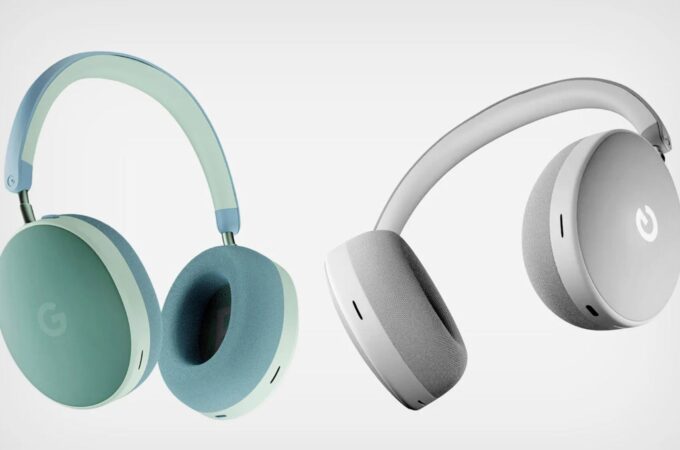 Even though Google got into headphones, with the Pixel Buds, they have yet to go all out with a pair of over ear headphones, like Apple did. And I’m not even talking about the Beats headphones, but rather the AirPods Max. Now we have a rival, through a concept called Google Pixel Headphones, created by designer Usef Hussain.

At first sight, the black version of the headphones feels like we had two Chromecasts attached to a band. The ear cups are touch sensitive and we have an USB-C port used to charge the device. There’s also quite a bit of similarity with the AirPods Max design, byt he way. I actually like the white/gray version better, which mimics the aesthetics of a Google Nest Hub, Google Home, while the green one looks and feels like a cheaper Skullcandy pair of sorts.

The design is pretty classic, barebones with a slim headrest, also a padded one. Notce that the earcups have textile material, fabric on top, with the letters L and R embroidered inside the cups. We also get metal sliders that offer improved height adjustment, but may increase the weight of the device. We also get a single button on the top of the left earcup for the Power and the touch sensitive thing feels a bit vague and I’d prefer physical controls honestly.

No sliders, please, they’re annoying. There’s also a pink version, which I actually enjoy, with a touch of orange in the mix. The color combos are taken from the Pixel 6 and Pixel 6 Pro. ANC should be here, plus a transparency mode and I can’t quite understand why we also have slits on the sides. All in all it’s a product that would succeed with the proper battery life.

About Kelvin
Passionate about design, especially smartphones, gadgets and tablets. Blogging on this site since 2008 and discovering prototypes and trends before bigshot companies sometimes
Important Things to Know Before Playing At Online Casino   Choosing the Perfect Background for Photos: 4 Tips That Can Help