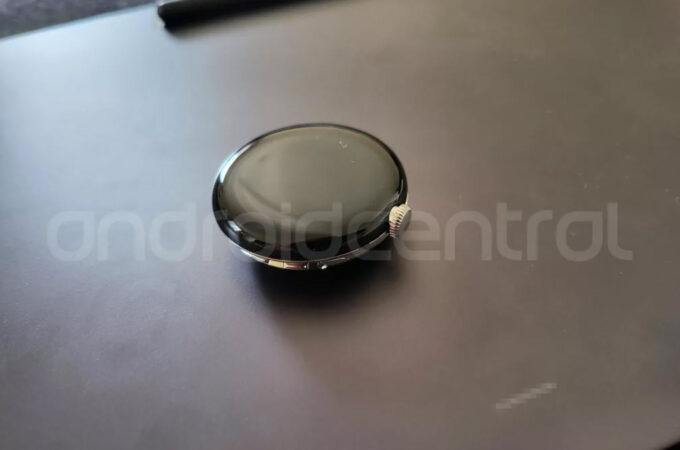 Google will hold the I/O 2022 event in May, where they will share information about new products, like the Pixel 6a, perhaps a new Nest speaker or two and also a Google Pixel Watch. The latter has leaked a bunch of times in renders and today we get to see it in hands on photos.

The source of these pics is Android Central, giving us a good look at the final design of the Pixel Watch. We get to see it sans belt, which is a bit odd and apparently the device is doing “an iPhone 4”, being left in a restaurant in UK. The watch is apparently a test unit, a prototype for the internal Pixel team. It’s very curvaceous, particularly the back side and as far as we know, it goes by the codename Rohan.

It looks identical to the leaked renders that were seen in the past. It comes with a minimalist design and very slim bezels. The device also has at least two hidden buttons. We get to see a crown button for sure and also a larger one below it. There’s a blue colored strap, which is a proprietary type of band tailor made for the Pixel Watch. Word of mouth says that you may not be allowed to swap straps.

Wireless charging is also part of the equation. By the way, the straps are very similar to the ones of the Apple Watch. Rumors talk about this device arriving with WearOS 3.1 preloaded, co-developed with Samsung and it should also feature some of the Fitbit expertise in health and other such functions. A temperature sensor should also be here, pulse sensor too, maybe also O2 saturation measurement. Stress measurement and sleep monitoring as well.

About Kelvin
Passionate about design, especially smartphones, gadgets and tablets. Blogging on this site since 2008 and discovering prototypes and trends before bigshot companies sometimes
Apple iPhone 14 No Notch Concept Rendered Again   Betting with Bitcoin: Top 10 Things You Should Know