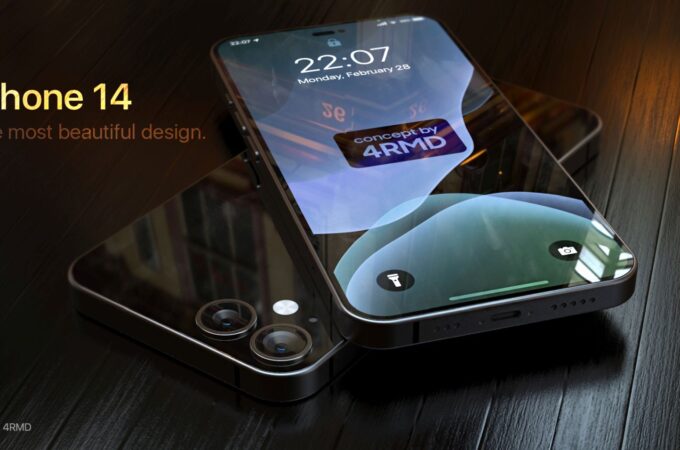 I know that by now you’ve seen a ton of renders of the iPhone 14 Pro and iPhone 14 Pro Max, but the entry level core model, iPhone 14 has been rarely rendered. Now it pops up courtesy of designer 4RMD and shockingly enough, it’s lacking a notch.

Another shock is the fact that the dual back camera is not aligned diagonally, but rather vertically. There’s also a resolution change, with two 16 MP sensors, instead of 12 MP ones. Well, at least we’re getting an upgrade, although not as big as the 48 megapixel camera on the iPhone 14 Pro. The iPhone 14 rendered by 4RMD has a 6.1 inch Super Retina XDR OLED Display, which integrates a punch hole for the 12 MP selfie camera and a pill shaped hole for the Face ID mechanism.

It also gets a 120 Hz refresh rate and Always On Display, which Apple has never tackled before. The CPU inside is the Apple A16 Bionic, which is actually the Apple A15 with some minor upgrades, like maybe frequency and also more GPU cores. At the same time iPhone 14 Pro gets an Apple A16 Pro CPU, which is the real upgrade. This iPhone 14 concept also gets iOS 16 with stacked widgets and two unlikely features: an USB-C port and also Touch ID.

Faster charging sticks to a mere 25W though. The designer also shows colors like Rose Gold, Fresh Mint, Silver, Midnight and Product RED. Touch ID is integrated on the side this time and it definitely looks and sounds like overkill to me. A good piece of news is that the 6.1 inch screen has narrower bezels. To me it seems that the camera lenses have increased in size a lot.

About Kelvin
Passionate about design, especially smartphones, gadgets and tablets. Blogging on this site since 2008 and discovering prototypes and trends before bigshot companies sometimes
Extractor Fan: A Buyer’s Guide   Google Pixel Watch Leaks in Fresh Hands On Photos