HTC Caymac Render by Hasan Kaymak, the Pinnacle of HTC Designs in 2014

Of all the HTC concepts this year, the HTC Caymac stands out, because it’s a very elaborate render. The handset should be a typical 2014 flagship, because it sports a 5.2 inch 2K display, among others. 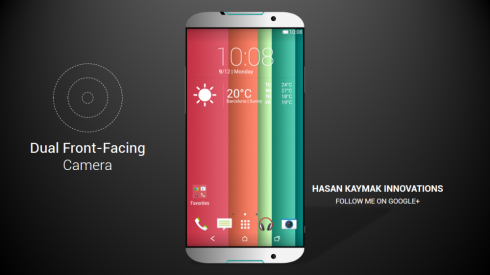 The HTC Caymac uses an Nvidia Parker processor, which is actually the 2015 version of the Nvidia flagship CPU and it comes with HTC Sense 6.5 applied on top of Android. It’s got a dual front facing camera setup, that’s used for taking wide pictures and different perspectives and effects. This HTC concept also has a physical camera button, BoomSound speakers and 5 way Pocco Pins (whatever those are, honestly I don’t know).

There’s a 16 megapixel camera at the back with HTC Zoe support and a huge 4150 mAh battery inside. We’ve got a removable back cover here, a microSD card slot, a nano SIM card slot and probably 3 GB of RAM as well as 128 GB of storage. As you can see, the screen is an edge to edge one and the case seems metallic, which was to be expected.

One word that comes to mind when looking at this render is: finesse.

About Kelvin
Passionate about design, especially smartphones, gadgets and tablets. Blogging on this site since 2008 and discovering prototypes and trends before bigshot companies sometimes
Nexus 8 Rendered by Nikolai Prettner   Samsung Galaxy Note 4 is Back From its Break With a New Design