Over the past weeks there was a Twitter account called @evleaks that leaked a lot of new products, including the HTC Accord that’s launching today, Nokia Lumia 920 and 820, plus a mystery HTC tablet. The tablet is pictured below in the gallery and we compare it to the mockup you see as the first picture, a creation of the designer Danny Tu. He was the one who created the brilliant HTC 5 inch phablet. 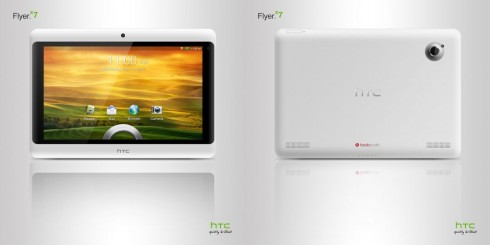 His creation was so good that even Engadget thought it was the real deal and now he’s back with a HTC Flyer 2012 version called HTC Flyer X7. To me this looks like an elongated HTC One X, especially at the back. It would be cool if HTC launched a new and kickass 7 inch tablet, with Beats Audio technology on board, loud and clear speakers, a decent 8 megapixel ImageSense camera and Android 4.1 Jelly Bean. Quad core is a must have, especially in the Snapdragon S4 Pro flavour and 2 GB of RAM would also help.

Other than that well, maybe a 1280 x 800 pixel resolution would help, as well as a 2 megapixel front camera. The tablet in the leaked images from @evleaks looks more like a 10 inch device and apparently also borrows a lot from the design of an iMac, a little too much actually… Did HTC create this device only to figure out that it resembles the iMac and then killed it?!