Designer Alexandros Stasinopoulos imagined a very interesting Windows Phone concept called Kanavos. This one involves real life tiles, physical squares that make up the body of a WP handset. The designer wanted to combine software experience with the hardware one and create a visual interaction between them. 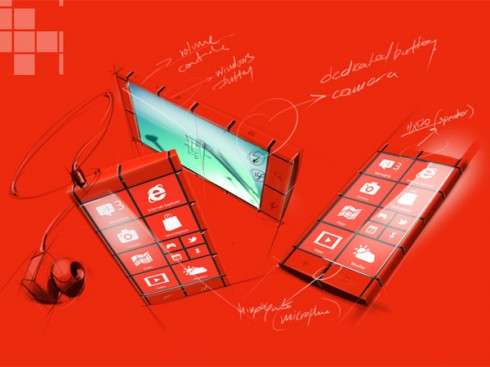 Vertical and horizontal contrast color stripes are involved in the design of the phone and there’s a strong Windows interface design. To sum it up I can say that the OS and the interface blend and complete each other. Kanavos also gave up on the Windows button from the lower front side of the phone and place it to the sides, most likely together with the other function buttons. This is done in order to make access to the buttons easier when holding the device.

The black and white versions of this phone make me think it looks like a grenade, especially the back part, which is kind of cool actually. There’s also a chocolate bar resemblance going on and this has got to be a very original design study, I have to admit. The idea is that you mustn’t be afraid to explore new formats…