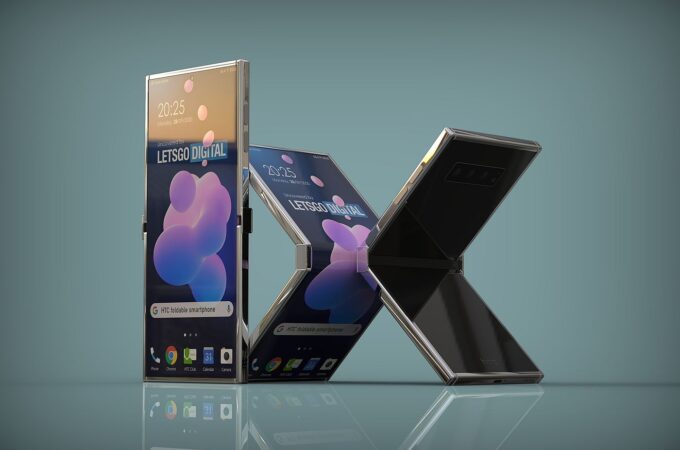 HTC hasn’t been doing that well lately, changing CEOs, giving up on flagships and focusing more on entry level smartphones. They keep stating that they’re prepping a 5G flagship, but that never comes out. They’ve been launching a few entry level and midrange models here and there, but nothing more. This time we’re treated to a patent of a HTC foldable phone, which takes the clamshell approach but in a different way.

The patent was dug up by Letsgodigital, who also turned it into renders of the smartphone. So, we’re dealing with a clamshell foldable phone, in the vein of Moto RAZR 5G or Galaxy Z Flip, but flipping in a different manner. Instead of rotating inwards, it rotates outwards and leaves the screen on the outside, while the main camera is kept on the inside. This foldable smartphone has two support modules in which gears are incorporated. This helps so that the display panels aren’t over stretched during the folding process.

This way it also gets rid of the potential wrinkles of the screen panel. The flexible screen is located outside the phone, making it an outward folding device. The Huawei Mate X and Mate Xs have a rather similar approach, ditching an extra external screen. The patent documentation seems to hint that the device is in its early stages of development, with the focus of the HTC R&D work being a revolutionary hinge right now. Not being able to use a camera when closed seems like a bummer, but Letsgodigital did put a punch hole in the screen for a selfie shooter.

A separate camera system with 3 sensors on the back works when you use the phone completely open. When fully opened up, this looks like another one of those narrow and elongated smartphones, much like the Moto RAZR 5G. It does have big bezels and some sort of “lids” for the hinge on the sides, also like the latest RAZR. I’m not very sure people will be buying this, if the design turns out this way. And I’m not sure how many years HTC can keep launching phones before bankruptcy.

About Kelvin
Passionate about design, especially smartphones, gadgets and tablets. Blogging on this site since 2008 and discovering prototypes and trends before bigshot companies sometimes
Nokia N Series Is Back, With a 2020 Smartphone Concept   Sony PlayStation Portable Concept Gets the 2020 Treatment