Hasan Kaymak, the guy behind the HTC Concepts community sent us his latest render, the HTC Legend 5, accompanied by a video showing a HTC Sense 5.0 concept lockscreen. The original HTC Legend was very loved by the public and it had sort of a follow-up through the HTC One V if I’m not mistaking. 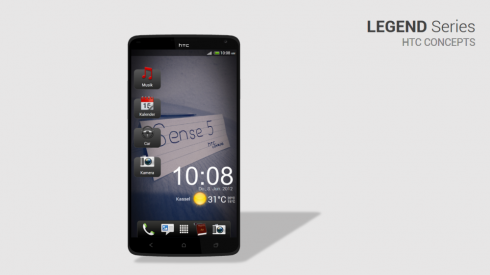 Now it’s time for a real worthy successor to the throne, one that adopts an elongated design, capacitive buttons and HTC Sense 5.0, that’s shown in the video below. HTC Legend 5 is a 5 inch Full HD smartphone with a S LCD 3 display and an Nvidia Tegra 4 processor at 1.9 GHz. There’s also a 4000 mAh battery on board and the device supports Beats Audio Streaming, HTC Messenger, HTC Quick Actions (you can add pictures, the music you’re listening to and places in your notes).

This HTC concept runs Android 4.2.1 with HTC Sense 5.0, that involves a very interactive lockscreen, filled with widgets and such elements. At the back there’s a 13 megapixel camera, while upfront we’ve got a 2.9 megapixel sensor with Full HD capture. The lockscreen concept is neat and clean, just like HTC Sense 5.0 is rumored to be. What do you think of this design?

About Thrystan
HTC One L Has Unusually Placed Camera, is a Bit Curved   Samsung N4 Concept is A Nexus Phone… Almost