HTC One L Has Unusually Placed Camera, is a Bit Curved

Created by Daniel Keith Jones, HTC One L is a concept we’ve seen before, or at least the name has been used once more. The designer says that this device is a HTC smartphone based on the One series and created using AutoCad 2012 and Autodesk Showcase 2012. 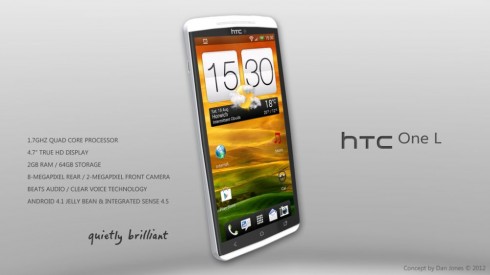 The designer offers a side view of the phone, so it can confirm we’re dealing with a slightly curved handset, that may remind you of the Xperia Arc a bit, at least as far as the profile goes. HTC One L features a 1.7 GHz quad core processor, a 4.7 inch True HD display (probably 1080p), 2 GB of RAM and 64 GB of storage. The center placed back camera is an 8 megapixel unit and upfront we’ve got a 2 megapixel shooter. One L uses Beats Audio technology and Clear Voice technology too.

It integrates Android 4.1 Jelly Bean and HTC Sense 4.5, although Jelly Bean 4.2 and Sense 5.0 would make more sense. The designer claims that he positioned the camera at the center of the HTC concept in order for it to be used more easily in landscape mode and also to stand out from other One series models. The lens protrudes, just like on the HTC One X, but thanks to the curved profile, the lens won’t touch a flat surface, like it happened on the One X.

[via Deviantart and Daniel Keith Jones]