It’s a bit early to start thinking about the HTC One M9, but some designers are and their imagination is turned into almost reality through concepts. This new device is designed by Ross White, it’s shown below and the idea here is to make the smartphone more compact. 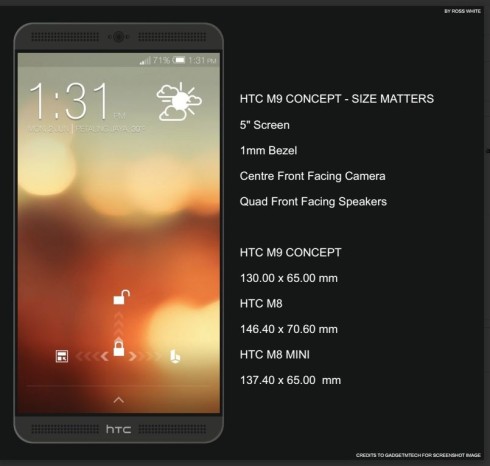 It comes with minimal bezels, a 5 inch screen and an overall body size smaller than the one of the M8 Mini. The front facing speakers are split, allowing the device to integrate a central front facing camera and there’s a HTC logo on the bottom panel. This handset has a 1 mm thick bezel, quad front facing speakers and it’s less long and less wide than its predecessor by 16 and 5 mm respectively.

The fact that it has the same width as the HTC One Mini 2 is all the more impressive. Frankly speaking, the HTC One M8 speakers are already perfect, so implementing quad speakers is a bit overkill. Why make the best even better? I can’t see any other company coming up with a better speaker system in the near future. What do you think of the HTC M9?

About Kelvin
Passionate about design, especially smartphones, gadgets and tablets. Blogging on this site since 2008 and discovering prototypes and trends before bigshot companies sometimes
Old School Goes New School: Ericsson T28 and Nokia 3310 are Back From the Dead   Fresh iPhone 6 Concept Inspired by Latest Leaks and Rumors (Video)