HTC One M9 With Windows 10 In the House!

Jonas Daehnert aka Phone Designer may have designed a stunning HTC One M9, but he didn’t forget its Windows Phone version. Judging by the predecessor, this unit may end up being called HTC One M9 with Windows 10. 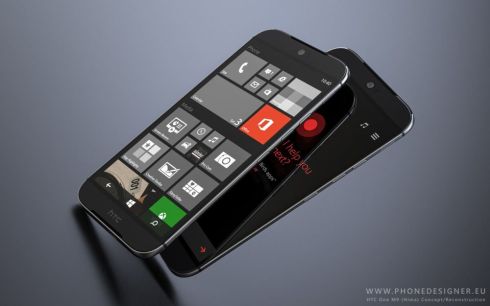 Anyway, it keeps the slim allure, big front camera and pill shaped buttons. The screen has slim bezels and it appears that the designer uses an older version of Windows Phone here. People who are fond of Lumias may find a reason to switch to HTC if this becomes real. If only HTC would decide to throw in some extra software on the Windows machines they make.

They’re more than capable to deliver photo editing software, maybe some music software, social network or game streaming app. Anyway, try to forget about the HTC One M9 leaks for a bit and enjoy this Windows 10 concept. What do you think?

About Kelvin
Passionate about design, especially smartphones, gadgets and tablets. Blogging on this site since 2008 and discovering prototypes and trends before bigshot companies sometimes
iPhone 6c is Basically the Polycarbonate iPhone 6, With a Small Twist…   Samsung Galaxy S6 Edge Concept by Ivo Maric and Jermaine Smit Looks Fashionable