Bob Freking is a regular on our website since no day passes without him emailing a concept to us or two… An example is his latest work, HTC Two X, the successor of the One X. The idea Bob had was to combine the kickass camera on the HTC Titan II with ImageSense technology, the screen of the HTC J Butterfly and a quad core processor. The result can be seen below and teased in the video at the end of the article. 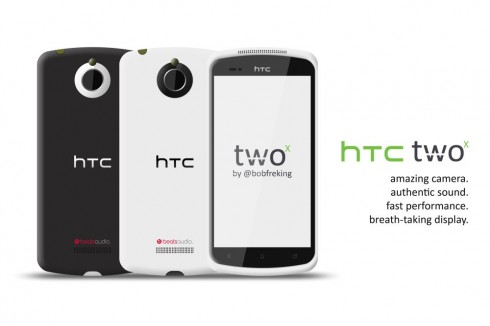 So what we’re dealing with here is the HTC Two X concept, that packs a 16 megapixel ImageSense camera, a quad core Snapdragon S4 Pro processor and a 1080p Super LCD 3 display. Inside is a huge 3000 mAh battery, that would make even the likes of Motorola Droid RAZR MAXX jealous. Also, this model runs “the latest version of Android”, that’s probably Android 4.2 or should be in the near future. The device also has 2 GB of RAM and 32 GB of internal storage and I wonder if this one gets a microSD slot or not.

What I remember about the HTC One X from this spring is that it had some screen problems, a bit of overheating, people complained about its lack of microSD card slot and its microSIM tray was hard to remove. The thing I liked most about it was the camera, that frankly speaking is superior to the one of the Samsung Galaxy S III and Sony Xperia S. Are you ready for the Two X?