While 5 inch seems to be the max diagonal a supposed 2012 Nexus phone could have, Killu Chan goes past that with a new Sony Xperia concept. I’m talking about the Sony Xperia Nexus, pictured below in a new mockup and packing some hardcore specs, that include 128 GB of storage and 4GB of RAM. 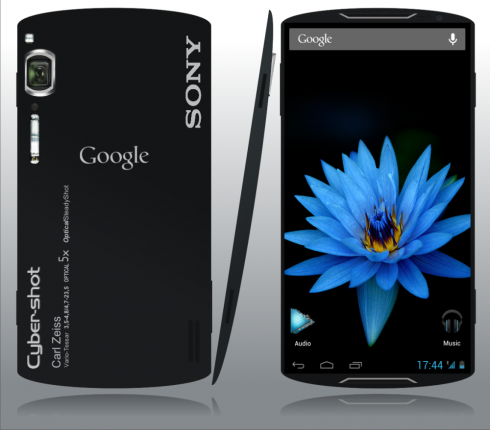 The device comes with a LED backlit LCD capacitive touchscreen with a 720 x 1280 pixel resolution and 5.5 inch diagonal with 408 ppi density. The screen supports multitouch for up to 10 fingers, relies on Sony Mobile Bravia Engine technology and benefits from Gorilla Glass 2 protection. On the connectivity side we’ve got LTE, HSDPA at 42 Mbps, WiFi, DLNA, Bluetooth 4.0, microUSB 2.0, microHDMI and probably NFC as well. At the back of the Xperia Nexus there’s an 18 megapixel camera with Carl Zeiss Optics Vario Tessar, autofocus, Xenon flash and image stabilization.

Upfront we’ve got a 3.15MP camera and under the hood there’s a Li-Ion 3500 mAh battery. As far as software goes, we’ve got Android Key Lime Pie running the show, on top of an Nvidia Tegra 4 quad core 2.1 GHz processor. Wireless charging is supported on this revolutionary model, that also relies on a nano SIM card. This model greatly reminds me of a Cybershot camera of sorts and some older concepts from back in 2008 and 2009. This is probably the first phone with the battery, signal and hour moved to the bottom and the virtual buttons so small… Interesting idea!

About Thrystan
Sony Xperia Plus Mockup, by Ben Ling, an Atypical Device   HTC Two X, Successor of the One X Borrows From HTC Titan II and J Butterfly (Video)